Minnesota Power and the Minnesota National Guard are partners in a major solar power plant at Camp Ripley, a regional training facility for the Guard near Little Falls, Minn.

The 10-megawatt array is the largest solar energy installation on military property in the state and the largest at any National Guard base in the country. It also is among Minnesota's largest single-site solar arrays.

The solar project covers nearly 80 acres of underutilized government property at Camp Ripley with photovoltaic panels on racks. The $23 million project was completed in November 2016.

Energy generated by the solar array allows Minnesota Power to achieve about one-third of its requirement under the state's solar energy standard. The law, enacted in 2013 by the Minnesota Legislature, requires investor-owned utilities such as Minnesota Power to get 1.5 percent of their energy from the sun.

For more information on the the history of Camp Ripley, how the solar array works and the partnership between Minnesota Power and the Minnesota National Guard, click on the images below. 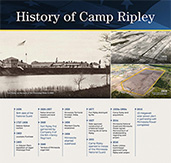 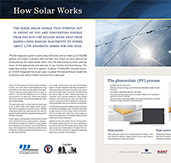