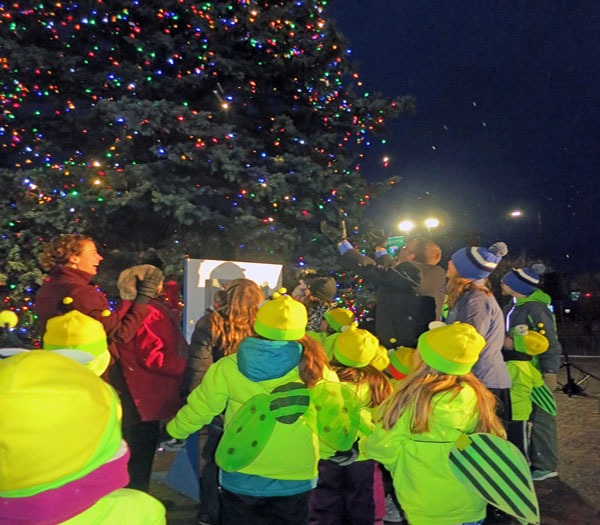 Frank Frederickson (right of switch) and his family join tree donor Julianne Raymond (left of switch) and her two granddaughters to flip the switch to light the 2018 Community Christmas Tree on Friday evening on Lake Superior Plaza in front of the ALLETE/Minnesota Power building. 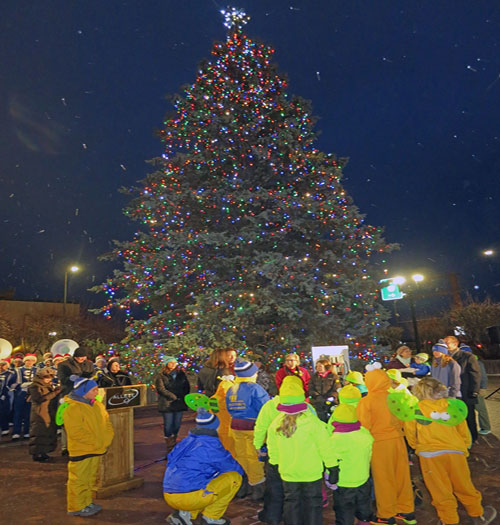 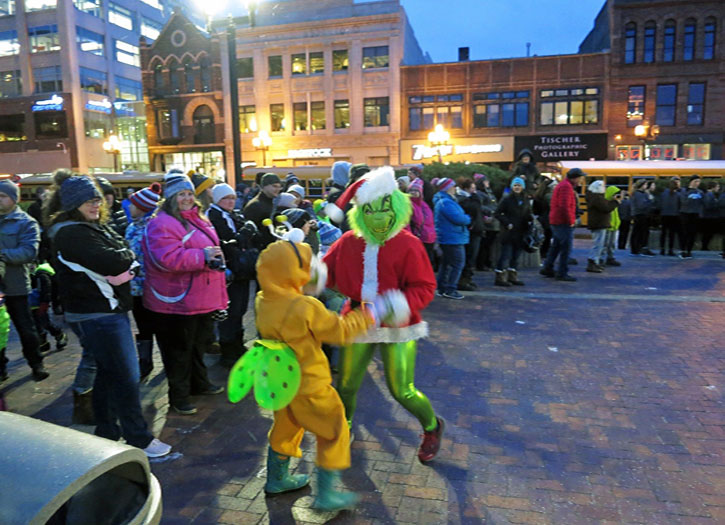 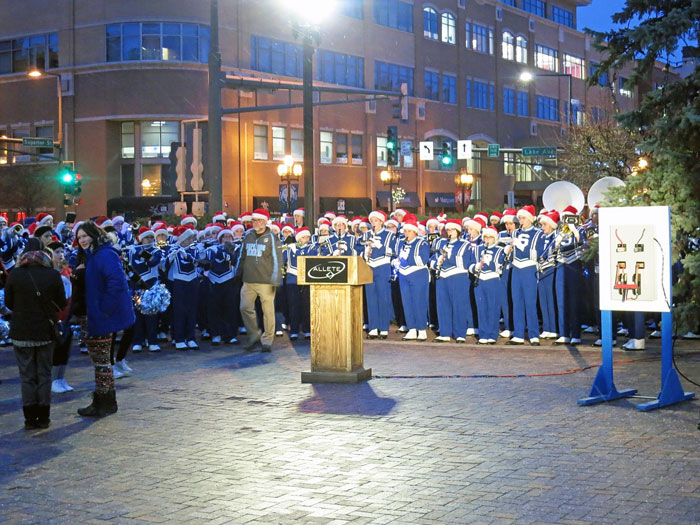 A bit of light snow lent a holiday atmosphere as the Minnesota Power and guests celebrated the 2018 Community Christmas Tree lighting on the plaza in front of the ALLETE/Minnesota Power building at Lake Avenue and Superior Street.

The honor of throwing the switch to light about 6,000 multicolored LED lights decorating the 40-foot spruce fell to Frank Frederickson, Minnesota Power vice president of customer experience, and his family along with the tree donor, Julianne Raymond, and her granddaughter.

About 175 people gathered to watch the 34th annual tree lighting on Nov. 16 as the Superior High School band played holiday music, opening with “You’re a Mean One, Mister Grinch” that included a Grinch mascot. Frederickson, Duluth Mayor Emily Larson and Kristi Stokes from the Greater Downtown Council made brief remarks. Frederickson welcomed everyone to the plaza and thanked the Raymonds for their donation and also thanked the Minnesota Power, Northern Clearing and Kraemer Construction crews who cut, delivered, set up and decorated the tree.

“Each year, we light this Community Christmas Tree to share with all of our neighbors throughout the Northland, beginning our preparation for a season that brings families and friends together in generous thanksgiving for the gifts we have received,” he said.

He said the company and its employees value giving back to communities, with combined giving from Minnesota Power, its foundation, employees and retirees exceeding $1 million this year.

“As we light this tree, let us reflect upon the meaning of this season and how we as individuals and communities can come together and truly give back to make a difference in the lives of those in need,” he said.

After the tree was lit, Larson thanked Minnesota Power and the Raymonds and everyone out celebrating the season at the 60th annual Christmas City of the North parade, which followed the tree lighting.

“This kicks off a wonderful season of joy and gratitude in the city of Duluth,” she said.

Stokes reminded people that Superior Street is open for business after a reconstruction project was recently completed, and urged people to shop locally this holiday season.

“It truly is a revitalization of our downtown,” she said.

The blue spruce, estimated at 60 years old, was in the Raymonds’ yard when the family moved into the Kenwood neighborhood in 1977.

As is tradition, news anchor Emma Rechenberg opened the ceremony on KBJR’s “Live at Five” newscast for local television viewers while children of employees dressed in Louie the Lightning Bug costumes stood near the tree. About 17 children dressed as Little Louies also rode or walked alongside a Minnesota Power float in the Christmas City of the North parade.