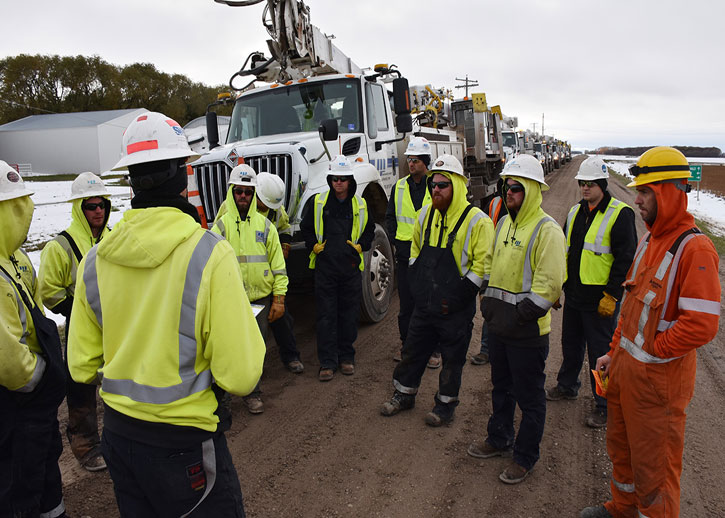 The crew gathers to talk over assignments as they prepare to depart Portage la Prairie for the Ashern area. 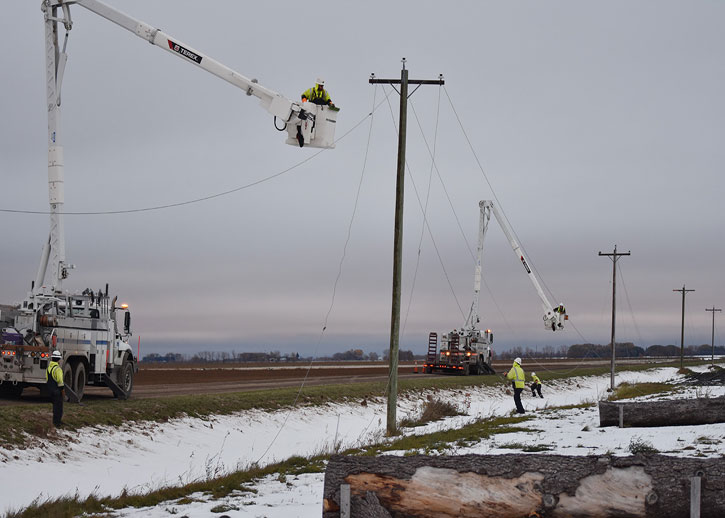 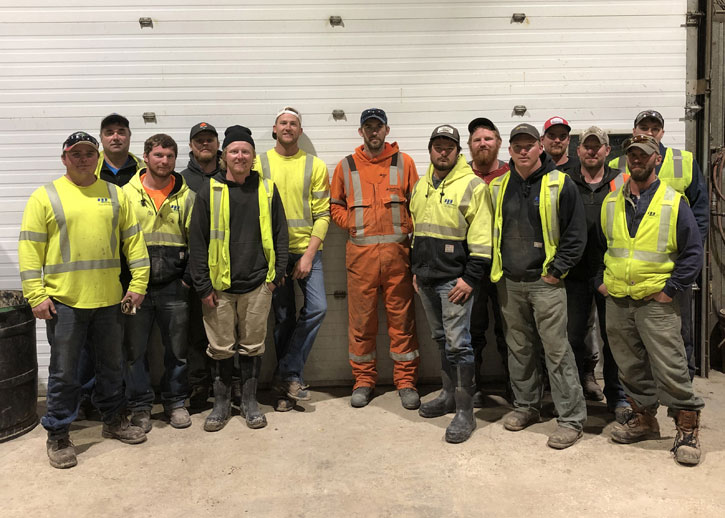 Two Achiever track diggers work in tandem to set poles. One digs the hole for the pole and the other sets the pole into place. 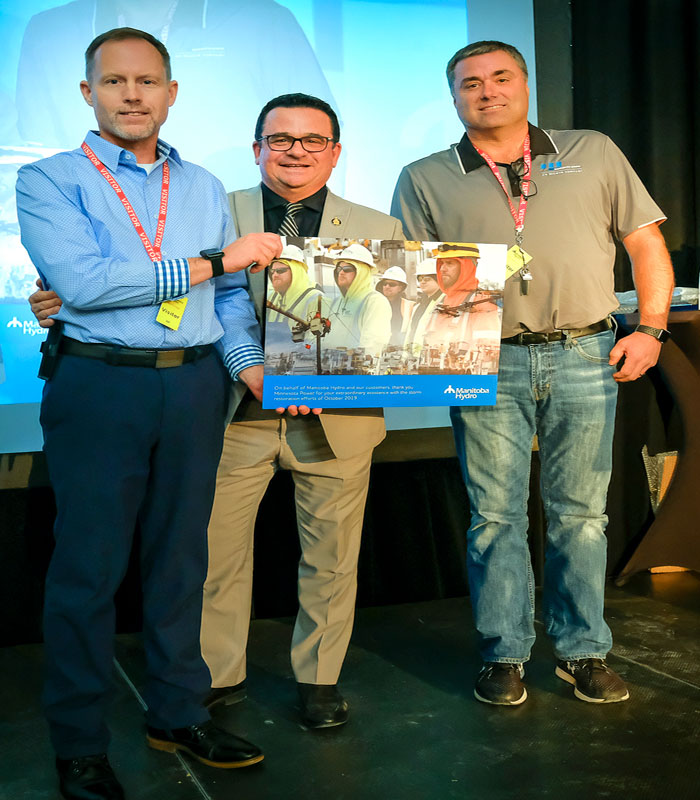 Tim Laeupple (left) and Dean Erdman (right) with Jeff Wharton, minister of Crown Services for Manitoba, at a recognition event Dec. 11 in Winnipeg. The plaque, with images of crew members in Manitoba, thanks Minnesota Power for its “extraordinary assistance.”

About midway through their stay in Canada, the crews from Minnesota Power and Superior Water, Light and Power sat down to a hot, home-cooked meal.

The Saturday night fish fry at the home of Portage la Prairie residents was a welcome respite from long days of stringing wire and setting poles in cold, muddy and wet conditions.

Norman and Melissa Vuignier and Kara and Jared Pawloski wanted to show their appreciation for the lineworkers and support staff that traveled to their community about 55 miles west of Winnipeg, Manitoba, earlier in the week. The crews were in Canada to help Manitoba Hydro restore power after a storm knocked out power to tens of thousands of customers across its service area the weekend of Oct. 12.

It was the first time Manitoba Hydro had asked for mutual aid from other utilities. The storm crumpled more than 100 transmission structures and 4,000 wooden utility poles in the Portage la Prairie, Dauphin and Interlake areas. It also was the first time MP/SWLP sent crews to Canada to help restore power after a major storm. They returned home on Thursday, Oct. 24.

Tim Laeupple, manager of line operations, said the company felt compelled to offer its equipment and expertise. Minnesota Power operates in a similar environment in regard to temperature and terrain and has line crews experienced working in areas with difficult access and with tracked equipment.

“We felt like we were one of the very few utilities who would be properly equipped to assist,” Laeupple said. “I know this comes as no surprise, but I continued to hear time and time again how impressed Manitoba Hydro was with our team and the equipment we brought with us to help.”

Dan Gunderson, vice president Transmission and Distribution, thanked the MP/SWLP crews that stepped up to help our neighbor to the north.

“I’m very proud of the entire team for their work helping to support Manitoba Hydro. Given our own experience with storm restoration as well as those helping others, we have leveraged those experiences to grow and learn to become a great partner to help restore security, comfort and quality of life for others,” he said. “Another notable aspect of being involved in these efforts is that we get to share the tremendous talent within our workforce with others, which makes these efforts so unique. My thanks to everyone who not only traveled to put in the long hours, but those supporting from afar as well.”

Making friends at the fish fry

The Saturday night dinner invitation came after line crew supervisor Dean Erdman and Norman Vuignier struck up a conversation in a convenience store checkout line earlier in the week. The Canadians and Americans enjoyed walleye, brisket, pork loin, potatoes, salad and homemade cinnamon rolls along with conversation that lasted late into the evening.

Cooking dinner for a group of strangers is one example of how the Canadians showed their gratitude to Minnesota Power and Manitoba Hydro and its two other mutual aid partners—SaskPower and Hydro One. Manitoba Hydro officials reported overwhelming public support for all the utility workers and said the public went out of its way to show appreciation.

Erdman said the first assignment after arriving in Canada was to reconstruct six miles of distribution line along a rural gravel road. The MP/SWLP crews did the first three miles themselves and worked with Manitoba Hydro and contractor crews for the last three miles.

“All six miles were down. Poles, wires, everything was down,” he said. “We put line up and poles in the ground in a very efficient way. … They did a fantastic job and they did it in an efficient and safe manner.”

Their second assignment was in wet, swampy terrain near Gypsumville, working the first section of a 10-mile line. Erdman said when they got to the job site, they watched as many as 120 vehicles pass by as the various crews positioned themselves to repair the line. Chest waders he purchased for the crews shortly after they arrived in Canada proved especially useful here where they faced ditches with three to five feet of water.

The day after the MP/SWLP crews arrived home, on Friday, Oct. 25, Manitoba Hydro reported all communities that lost power during the massive storm had been restored.

Minnesota Power’s assistance in restoring power after the storm that caused widespread damage in Manitoba was recognized at a special event Dec. 11 at the headquarters of Manitoba Hydro in Winnipeg.

Jay Grewal, president and chief executive officer at Manitoba Hydro, recognized the utility’s mutual aid partners Minnesota Power, SaskPower and Hydro One, along with Manitoba Hydro employees for their work after the storm in October left tens of thousands without power.

Also speaking at the event were Jeff Wharton, minister of Crown Services for Manitoba, and Marina James, Manitoba Hydro board chair. The recognition event followed a roundtable with representatives from the utilities to discuss the restoration effort.

ALLETE President Bethany Owen said Minnesota Power and Superior Water, Light and Power were proud to respond to a neighbor in need.

“When we learned about the devastation Manitoba Hydro suffered to its system and the number of customers that were affected with more cold weather on the way, we knew we had to help by sending our equipment and experienced team north. We’re pleased to know we were able to make the restoration a little easier and quicker for our friends in Canada,” Owen said. “Mutual aid response is a hallmark of the energy industry and whether in Florida and Puerto Rico in 2017 and 2018 or Manitoba this year, the expertise, work ethic and good humor of our teams speak to our reputation as a trusted partner when it comes to getting the lights back on.”

“Times like these are a reminder of how fortunate we are to have neighboring utilities who will come to our aid with a mere ask, and not just from adjacent provinces but another country,” Grewal wrote in a letter to Owen and ALLETE Chairman and CEO Al Hodnik. “I hope you will accept our deep appreciation and convey our sincerest gratitude to all of your staff. We are proud to count on Minnesota Power and are ready to reciprocate if and when you ever need us.”