MP and partners swoop in to build nest for eaglet 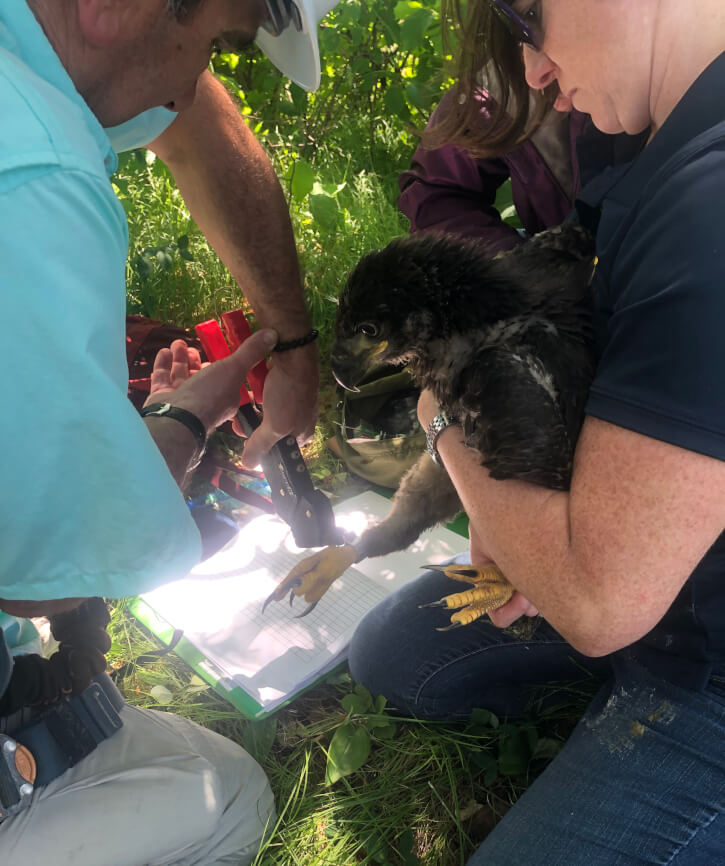 Margaret (Mags) Rheude of the USFWS holds the young eagle while Mark Martell places an identification band on its leg. Even at about five weeks old, the bird’s wingspan was 4 to 5 feet, said Ross Dudzik, environmental compliance specialist for Minnesota Power. 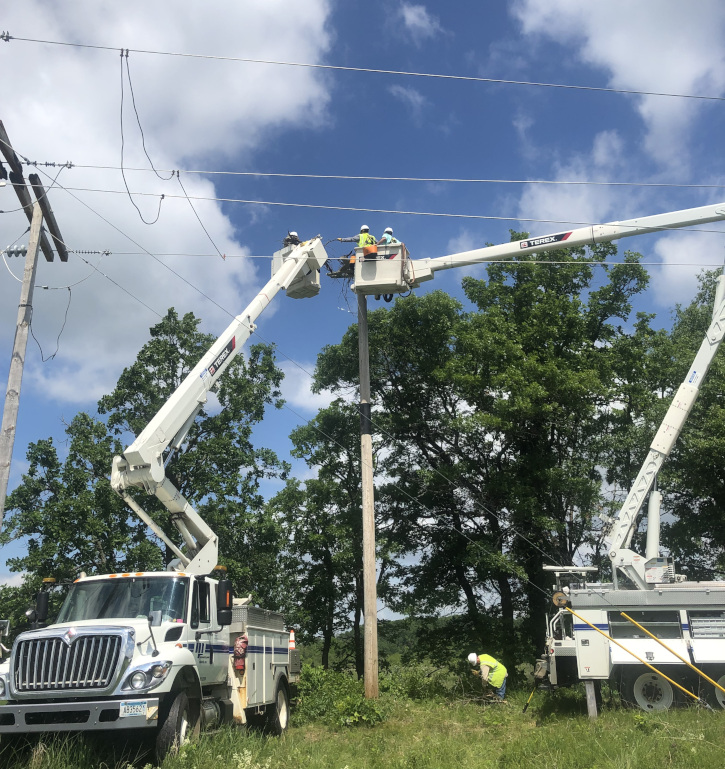 With guidance from bander Mark Martell, MP lineworkers build a nest on a vacant osprey platform. 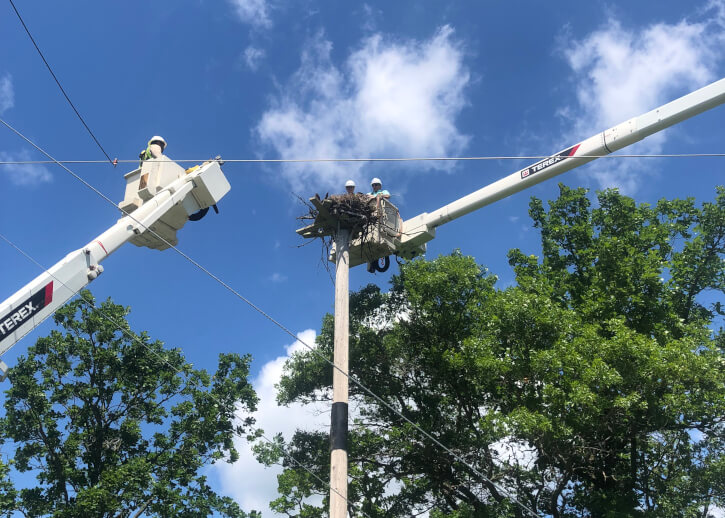 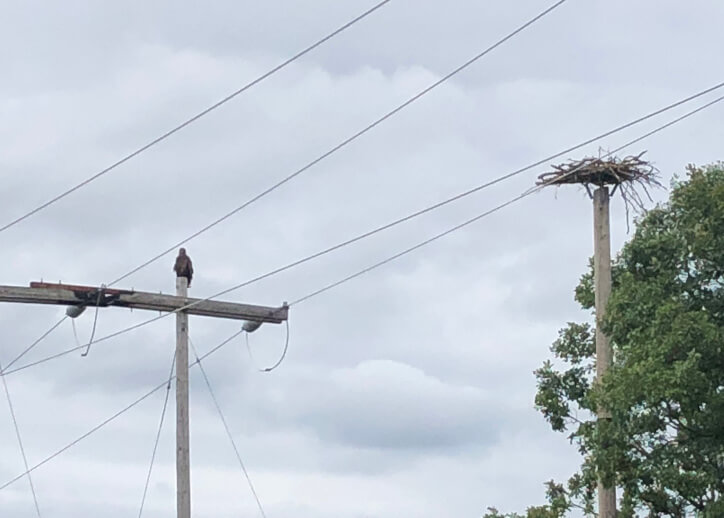 The young eagle perches on the repaired transmission structure near its nest. Permanent repairs can be made now that the bird has fledged.

You can call him Phoenix.

A young bald eagle is getting on with his life, thanks to some creative, on-the-spot problem-solving from Minnesota Power environmental specialists and lineworkers, along with the U.S. Fish and Wildlife Service and others.

It didn’t look so promising for the youngster on June 25 when company and agency representatives and a licensed eagle bander arrived at a 34.5-kilovolt distribution line near Baxter, Minnesota. Days earlier Minnesota Power had determined the eagle nest was causing momentary outages so this group was there to trim the nest where it touched the line and install insulators.

However, when the team arrived, they found the structure’s cross arm blackened and broken, the burned-up nest on the ground and the chick, still weeks away from being to fly, about 10 feet away. Somehow, the chick had managed to get to the ground unharmed and the parents had continued to care for it as evidenced by a pile of fish parts nearby.

After discussing pros and cons, the team settled on a solution: They would build a new nest for the eagles on a nearby vacant osprey platform and place the rescued chick in its new home. Everyone sprang into action.

Ross Dudzik, environmental compliance specialist II, who coordinated the visit and the applications for the permits necessary to deal with a federally protected bird, described the next few hours:

Licensed bander Mark Martell examined the young bird, which appeared to be in overall good health, and placed him in a crate in the shade. Lineworker-in-charge Brent Parkin temporarily repaired the burned cross arm; a permanent fix will be made now that the chick has fledged. Lineworker Joel Trosdahl trimmed branches of a nearby tree to make the new nest site more appealing to the eagles. Dudzik made a quick trip to Baxter for supplies, including some 2-by-6’s that Parkin and Trosdahl used to build perches for the adult birds. The group gathered sticks and grass, and Parkin, Trosdahl and lead lineworker Tim Schwartz constructed a new nest with Martell’s guidance. Martell, with help from Margaret Rheude of the U.S. Fish and Wildlife Service, banded the bird.

Then, with the nest ready for an occupant, Trosdahl and Martell placed the eaglet in its new home. Subsequent checks revealed the chick settled in and cared for by its parents.

Of course, none of this would have happened without the earlier legwork at Minnesota Power: Line crew supervisor Mike Jacobs recognizing the potential for issues with the nest early on and working with Dudzik and others to expedite permitting and determine if the line could be de-energized for the safety of the eagle and reliability for customers; Dudzik completing pages of applications to acquire the proper permits; consultations with Scott Schafer, daily outage coordinator, and Chris Bellefy, supervisor system operations, about rerouting power to another line while maintaining reliability; communicating with the Fish and Wildlife Service, Minnesota Department of Natural Resources and the Leech Lake Band of Ojibwe.

“It was definitely a team effort,” Schwartz said.

The effort appears to have paid off. On Aug. 13, Greg Prom, environmental compliance specialist senior, spotted the bird perched on a pole not far from the nest, a sure sign the eagle is flying and, like the mythical Phoenix who rose from the ashes, thriving.

“It was a really great experience to have everyone out in the field problem-solving and coming up with a solution,” said Rheude, who wrote about the experience in a story for the USFWS website. “I really want to thank Minnesota Power for being so efficient and helping carry out the repair, nest construction and chick transport.”

Dudzik said MP has a long history of collaborating with regulatory agencies to protect ospreys and eagles that use the company’s power poles for nesting platforms.

“We’re grateful for the opportunity to have worked with the USFWS, Minnesota DNR, Leech Lake Band of Ojibwe, Camp Ripley and other volunteers to ensure a positive outcome for this fledging eagle,” he said. “The biological expertise this group brought to the table, coupled with the creativity and quick action of MP’s linemen, was a great example of how partnerships are critical to live out our shared value of environmental stewardship.”