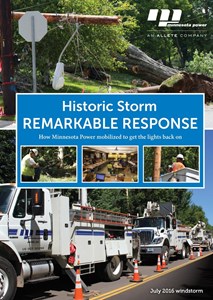 A remarkable chapter in Minnesota Power history and the company’s relationship with the communities it serves began in the early morning hours of July 21, 2016. That’s when a line of thunderstorms packing wind gusts of up to 100 mph raced across central and northern Minnesota, whipping up a mess of fallen trees, broken power poles and downed power lines.

More than 57,000 customers across MP’s service territory—almost 40 percent —were without power immediately after the storm. It was one of the worst and most widespread storms to hit Minnesota Power’s distribution and transmission system in 50 years.

To honor the one-year anniversary, the Corporate Communications Department at Minnesota Power produced a special publication, “Historic storm, remarkable response,” and video that recount employees’ dedication to getting the lights back on and the support of customers and the communities the company serves.