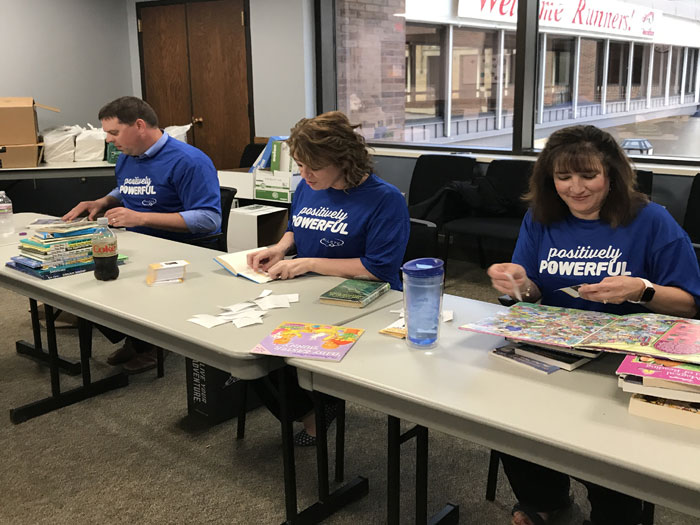 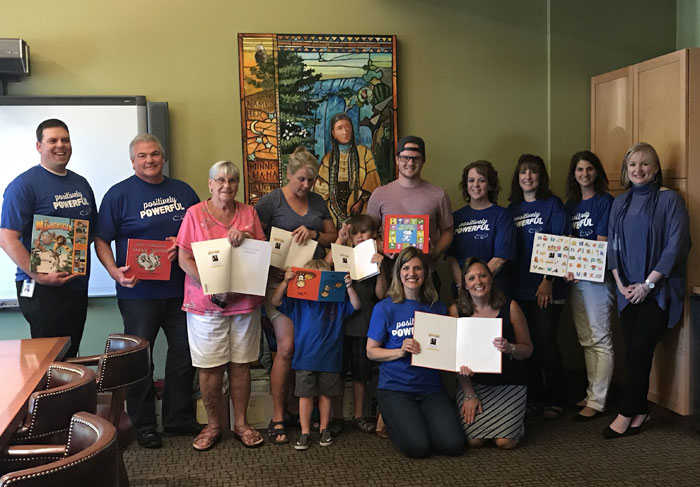 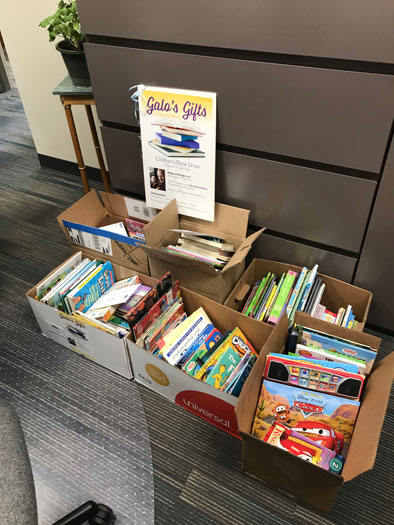 Some of the books collected at SWL&P. 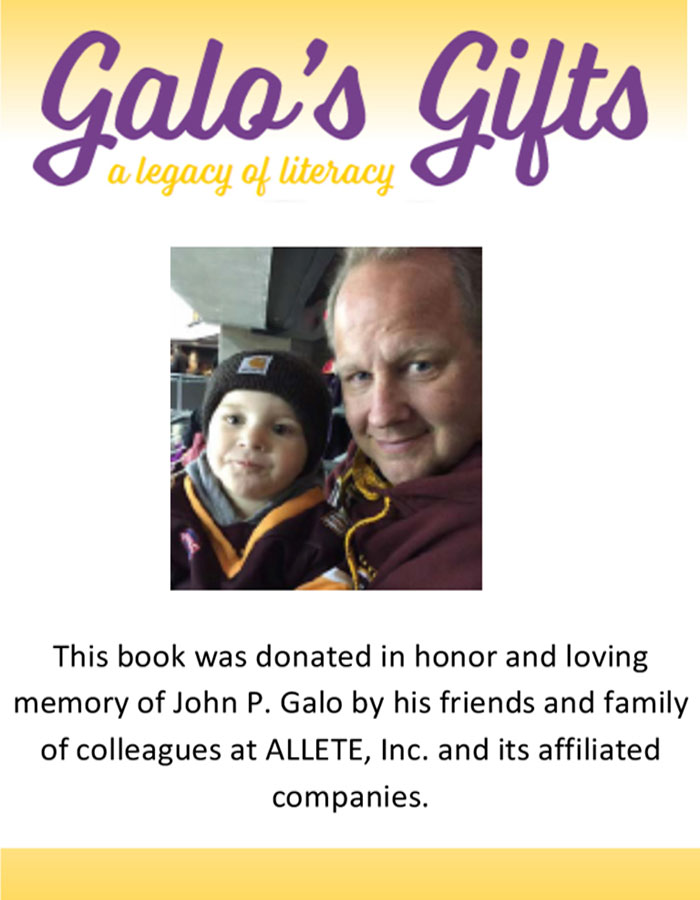 Employees placed this sticker inside the more than 1,400 books collected through the book drive. The photo is of Galo and Logan Creurer, son of Hillary and Ryan Creurer.

Those who knew John Galo often described him as a “kid at heart.”

That’s one of the reasons children flocked to Galo, an ALLETE human resources professional who died in January 2017 after suffering a heart attack at the age of 49. And it’s one of the reasons he would have loved the idea of “Galo’s Gifts: A Legacy of Literacy,” the company-wide children’s book drive in his honor.

The ALLETE Human Resources Business Partners (Diane Lundgren, Layne Weets, Kyle Ault, Amy McCarthy and Josh Goutermont) organized “Galo’s Gifts” in May in memory of the late director of employee/labor relations and talent acquisition, and employees across ALLETE and its subsidiaries, including Minnesota Power; Superior Water, Light and Power; and ALLETE Clean Energy, responded with enthusiasm. More than 1,400 new and used children’s books were collected, including picture books, board books and chapter books for kids ages 3-12.

Galo’s sister, Mariann Pavlich, said the book drive was a “wonderful idea” for honoring her brother.

“It touches my heart how his Minnesota Power (ALLETE) family comes together and keeps his spirit with us,” she said.

Employees recently distributed more than 1,100 of the books to Amberwing, a nonprofit mental health and substance abuse center for children, adolescents and their families in Duluth; and Northwood Children’s Services, a private, not-for-profit agency that provides care, education and treatment for boys and girls with emotional, behavioral and learning disabilities in Duluth.

Another 300 books collected by SWL&P were divided among organizations in Superior, Wisconsin: CASDA, the Center Against Sexual and Domestic Abuse which provides services to people hurt by domestic violence, sexual assault and child abuse; Harbor House, which provides shelter, transitional living and services for homeless women and families; the Boys & Girls Club, which provides supportive services for young people; the Superior YMCA; and Essentia Health St. Mary’s Hospital-Superior.

The donated books bear “Galo’s Gifts: A Legacy of Literacy” stickers noting that the book “was donated in honor and loving memory of John P. Galo by his friends and family of colleagues at ALLETE Inc. and its affiliated companies.” Employees gathered in June to sort the books and apply the stickers to the inside front covers.

Although Galo wasn’t known as an avid reader, the book drive was a great way to honor and remember him for several reasons, according to the Business Partners team:

The last of the book distributions came a week before the second annual John Galo Memorial 5K, organized by Galo’s family and scheduled for Wednesday, July 18, at Lester Park in Duluth. Minnesota Power is a sponsor of the run/walk/talk.

Last year, more than 300 people took to the trails and proceeds from the event went to Amberwing. This year, all proceeds will go to Life Source, a nonprofit organization dedicated to saving lives through organ, eye and tissue donations in the Upper Midwest. Galo was an organ donor.