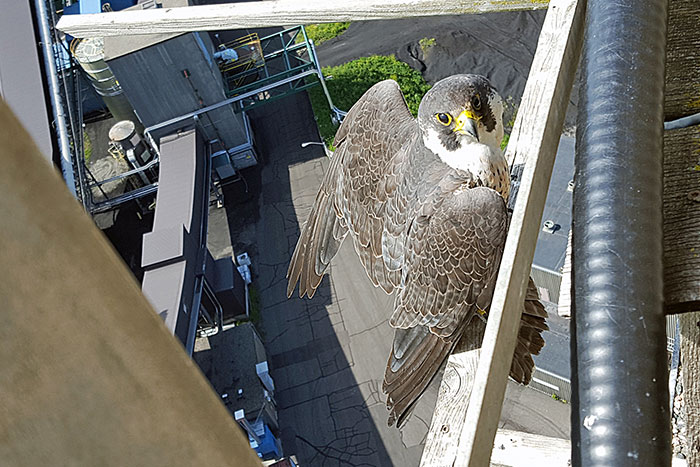 The adult female peregrine falcon defended the nest box at Boswell Energy Center during a July 5 leg banding, and kept a close watch throughout the process. 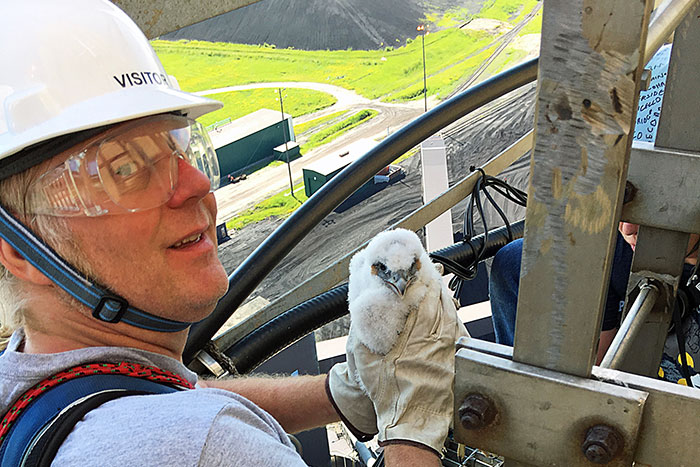 The leg bands placed on the chicks’ legs include this federal band issued by the federal Bird Banding Lab.

Amy Ries of the Raptor Resource Center in Decorah, Iowa, led the banding effort at the power plant in Cohasset, Minnesota, and said this was the first time she had seen a female stay in the nest box when banders tried to retrieve the chicks.

“When I looked in, mom had her wings outstretched and was looking threatening,” she said. “When I reached into the box to try to flush her, she ‘footed’ me instead of flying away. It took two more careful tries to get her out, and she remained extremely close to the box the entire time.”

Based on her plumage, Ries said the mother was a 2-year-old whose history is unknown because she is not banded. She said the unbanded male also was aggressive and got closer than most males do during the banding.

“I get the feeling these two adults could be a real handful next year,” she said.

Rich Narum one of two Minnesota Power employees chosen to help Ries with the banding. He said Ries told them to “just put your head down and let her bounce off your helmet” if the female attacked. While that didn’t happen, he said the male did try to scare them

“He’d fly in and pull away at the last second,” he said.

Minnesota Power employee Jim Erickson also made the 240-foot climb up the stack (in six minutes, which is quite fast) to help with the banding. Like Narum, he said he had a number of reasons to join the banding effort, including making the climb, seeing the falcons up close and enjoying the view from on high.

He had previously climbed a wind turbine at Taconite Ridge Energy Center near Mountain Iron, Minnesota, and said being on the Boswell stack didn’t induce the same sense of vertigo because the banders were on a platform with railings.

The two chicks, named Stacy and Buster, each had two leg bands attached, one on each leg. Ries said the bands are issued by the federal Bird Banding Lab, a division of the U.S. Geological Survey, and the Raptor Center at the University of Minnesota.

There now have been 74 falcons banded at Boswell since 1993, with another 23 banded at Hibbard Renewable Energy Center in Duluth, Minnesota, since 2008.

The leg bands allow researchers to track the falcons and their behavior, and do not harm the birds. Falcons raised in Minnesota Power nest boxes have been reported as far away as Florida, Central America and on oil rigs in the Gulf of Mexico.

Falcons feed mostly on other birds, and Ries said the falcons at Boswell appear to prey mainly on pigeons.

Minnesota Power employee Doug Braff, who maintains Minnesota Power’s falcon cams at Boswell and Hibbard, said Ries recommended the Boswell falcon nest box be replaced, so he will try to complete that in the fall. He also plans to reconfigure wiring enclosures on the back of the box allow better access to maintaining the cameras and associated equipment.

Narum said the climb and banding offered a great learning experience as Ries shared her knowledge of falcons, such as how she could tell the adult female was 2 years old because of her changing plumage. He said his philosophy is to always say yes when offered a new experience.

“How often do you have the opportunity to go climb a smokestack?” he said. “For anyone who sits behind a desk, that’s a rare opportunity. It’s a double treat for the desk jockeys to get out and gain appreciation for what other employees do on a regular basis.”