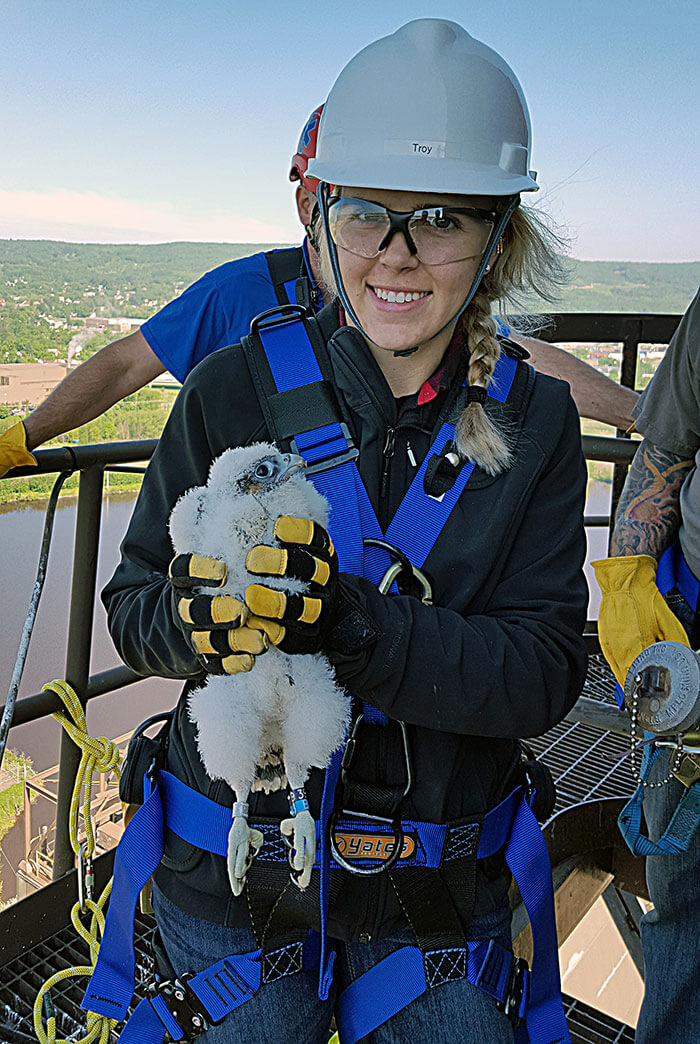 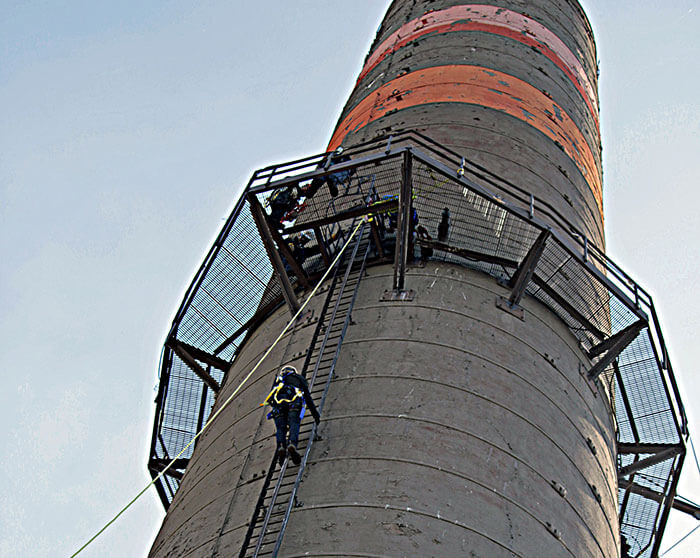 Sara Sauter descends from the platform and falcon nest box on the stack at the Hibbard Renewable Energy Center in Duluth on Thursday, June 15. 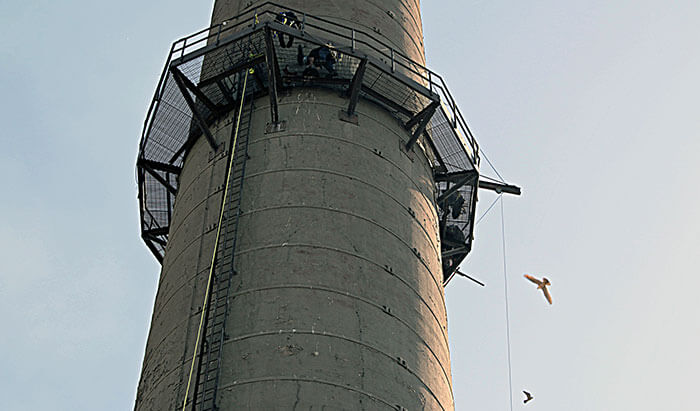 The two adult peregrine falcons dive at the team placing leg bands on their chicks at the Hibbard Renewable Energy Center on Thursday, June 15.

The persistent fog that had shrouded the Twin Ports area for more than a day lifted just in time Thursday, June 15, to allow a team to band three healthy peregrine falcon chicks from the nest box on the stack at Hibbard Renewable Energy Center in Duluth.

“They all looked absolutely great,” said Amy Ries with the Raptor Resource Project, who led the banding team on the stack. “They were pretty calm, which surprised me.”

Minnesota Power employee Steven Hagen was on the team with Ries and took this video of the banding.

Thursday’s effort brings to 95 the number of falcons banded at Minnesota Power’s Hibbard and Boswell Energy Center in Cohasset since 1993, when the nest box was established at Boswell. Since the Hibbard nest box was placed in 2008, 23 chicks have been banded there and 41 hatched. The nesting boxes at Boswell and Hibbard are managed in partnership with the Raptor Resource Project in Decorah, Iowa. RRP banders travel to Boswell and Hibbard nearly every year to band the chicks and check their health. The information is included in a database for tracking the birds.

Peregrine falcons, nature's fastest birds, were threatened with extinction by the use of the pesticide DDT. As the birds seek high, out-of-the-way places, such as the stacks at power plants, for nesting and pursuing their prey, the electric utility industry played an important role in the bird's recovery in the Upper Midwest. The banding partnership is part of the company’s core value of environmental stewardship. Four peregrine falcon chicks were banded at Hibbard in 2016.

Banding at Boswell is tentatively scheduled for July 5 because the eggs there were laid later than usual, and began hatching on June 13. Ries has described Boswell as one of the most productive nest boxes in the Midwest.

Anyone can keep an eye on the falcon activity at Boswell and Hibbard at Minnesota Power’s Falcon Cam.

Joining Ries at Hibbard on Thursday in the 100-foot climb to the platform and falcon nest box about 240 feet above ground were Minnesota Power employees Hagen, Sara Sauter, Jeff Hidde and Jeff Pritchard.

The employees said banding the falcons was definitely a once-in-a-lifetime experience, and appreciated that Ries shared her knowledge about these raptors. They said it is fascinating what has been done to help the falcons prosper when they were once on the verge of extinction, and that made holding one much more special.

The leg bands allow researchers to track the falcons and their behavior, and do not harm the birds. Falcons raised in Minnesota Power nest boxes have been reported in Florida, Central America and on oil rigs in the Gulf of Mexico.

Ries said the mother at Hibbard is the same female falcon as last year, and she has a name: Isabel. She was hatched on the Colonnade building in Minneapolis in 2009.