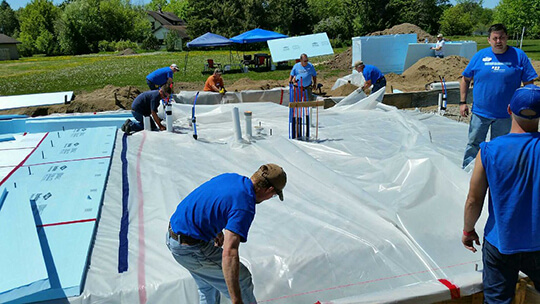 Homeowner Stephanie Severson celebrates with her son and twin daughters. 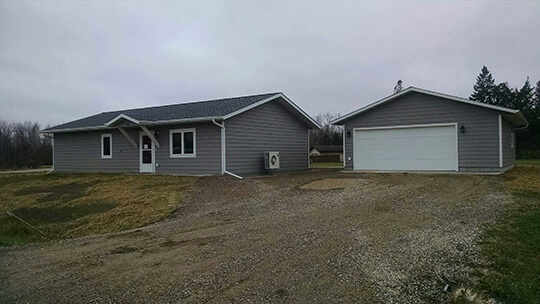 Stephanie Severson and her three young children were all smiles as they moved into their new home in December 2016. It was more than the thrill of home ownership. This particular three-bedroom house in Deer River, Minn., was designed and built by Itasca County Habitat for Humanity to be healthy, durable and energy efficient—making it an affordable place to live for the long term.

Minnesota Power’s Power of One® Home conservation improvement program (CIP) was a key partner in achieving that goal. The home was built to Minnesota Power’s Triple E standards for thermal integrity and energy performance, qualified for significant utility conservation rebates and features a cold climate air source heat pump (ASHP) that was donated and installed free of charge through a partnership initiated by Minnesota Power.

“Habitat for Humanity does a really nice job of building quality, energy-efficient, affordable homes,” Manthey said. “A home that meets Triple E standards consumes about half the amount of energy as a house built to code, so when you look at affordability for people with limited incomes trying to reduce their bills, that has a big impact over the life of a home.”

The Severson home almost did not qualify for Triple E rebates, even though it was built to program standards for insulation, windows and doors, airtight construction, moisture control, appliances, lighting and ventilation. It was missing one key element—primary electric heat. The home’s radiant floor heat system had a gas boiler.

Minnesota Power CIP Energy Analyst Chad Trebilcock immediately saw an opportunity to help the nonprofit and the homeowner, while advancing new technology at the same time. He noted the home would qualify for Triple E if builders installed a cold climate ASHP to meet all or most of the home’s heating needs, with the gas boiler system as a secondary heat source.

“I knew this would be a perfect application,” Trebilcock said. “ASHPs continue to gain more and more traction, especially in airtight, well-insulated Triple E homes where you don’t need as many BTUs an hour to heat, plus new cold climate units are proving to work well in our region.”

Minnesota Power partnered with distributor Gustave A. Larson and manufacturer Mitsubishi to donate and install a Mitsubishi cold climate ASHP with a seasonal energy efficiency ratio (SEER) of 22 and a heating season performance factor (HSPF) of 12. The high performance system produces heat efficiently at outdoor temperatures well below freezing. Partners also donated a base pan heater to protect the unit’s condenser from the cold.

“We would not have been able to purchase and install the heat pump without this donation because we could not pass the cost on to the family, and we would have lost the $1,900 Triple E rebate,” said Goldie Swalboski, program coordinator, Itasca County Habitat for Humanity. “It is all about affordability.”

“I was very excited about the system; it saves me money every month,” Severson said. “In-floor heat takes days to heat up and cool down, but I can turn on the air source heat pump and the house warms right up—it makes a huge difference.”

“It is very honorable when a corporation like Minnesota Power values what we do and thinks philanthropically,” said Amanda Lamppa, executive director, Itasca County Habitat for Humanity. “I want Minnesota Power (and its partners) to know how much we value them.”