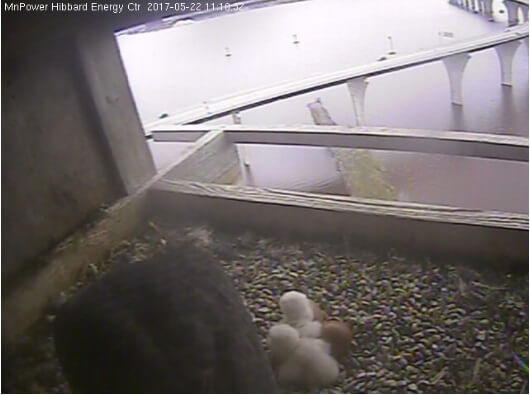 Two chicks hatched at Hibbard by noon May 22. Newborn chicks are covered in whitish down and weigh about 1.5 ounces.

Bird lovers from around the world can watch as peregrine falcons at two of Minnesota Power’s power plants raise their young.

Two of four eggs at Hibbard Renewable Energy Center in Duluth, Minnesota, had hatched by noon Monday, May 22. If all goes well, chicks from the two remaining eggs could soon join their nestlings. Meanwhile, up at Boswell Energy Center in Cohasset, Minnesota, incubation is underway and the three eggs there are expected to hatch in early June.

Minnesota Power’s FalconCam shows continuously updated live images of the nesting boxes several hundred feet up stacks at Hibbard and Boswell as well as a 24-hour view of the nests’ occupants. Follow the falcons at www.mnpower.com/FalconCam.

Both nesting boxes are managed in partnership with the Raptor Resource Project in Decorah, Iowa. RRP banders travel to Boswell and Hibbard nearly every year to band the chicks and check their health. The information is included in a database for tracking the birds.

Peregrine falcons typically lay a clutch of two to five eggs with incubation taking about 33 days. The Hibbard eggs were laid about April 21 and the Boswell eggs were laid the week of May 12.

Peregrines, the fastest raptor on earth, winter in vacation spots from Little Rock, Ark., to the tip of Argentina and seek private, high, out-of-the-way homes for nesting, mating and pursuing their prey. In the 1940s and ’50s, the birds were threatened with extinction by the use of the pesticide DDT. The electric industry played a key role in peregrine falcon recovery efforts in Minnesota and the upper Midwest.