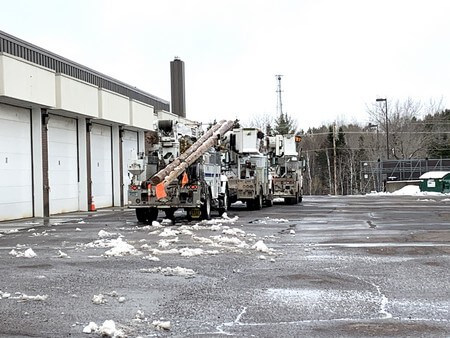 Crews stocked up with poles at the Herbert Service Center before traveling to the field for repairs.

A crew hangs new wire on distribution poles near Buckman. 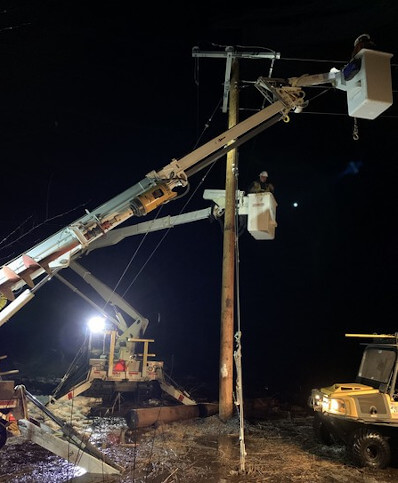 A crew repairs three downed poles with off-road tracked equipment in two feet of water in a dark, flooded field in the Western Division. 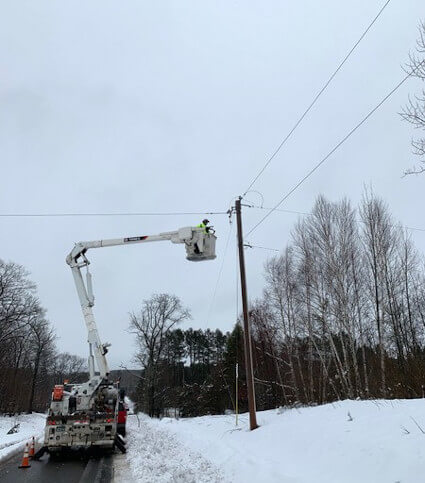 A lineworker hangs lines brought down in the storm in the Chub Lake area near Carlton.

During a challenging response to the first major storm of the year while operating under COVID-19 precautions, the dedication of the Minnesota Power and Superior Water, Light and Power operations teams shined through for customers and co-workers.

Many crews worked through the night on Sunday, March 29, to restore power after the storm bringing wet, heavy snow and high winds hit the region Saturday night.

Layered over the weather and travel challenges was the company’s COVID-19 plan requiring social distancing and more. Crews traveled to job sites one person per vehicle so they didn’t share indoor space. Stores employees arranged equipment on docks for crews to pick up with no close personal interaction. Much of the coordination of getting the crews into the field and to the right spot was done from home.

By late Sunday morning, outages were affecting about 5,900 customers, many of them small, scattered outages from north of Duluth west to Floodwood and south to Sandstone. Hit particularly hard were areas near Cloquet and near Pierz and Royalton. Outage responses started late Saturday night and picked up after 1 a.m. Sunday, with crews already in the field near Barnum and Pierz. All available crews were on the job early Sunday and wouldn’t finish up until Monday.

“At our peak today we were at 360 trouble orders. To put this in perspective, I have not seen this volume of orders since the Duluth wind storm” in 2016, Asperheim wrote. She prioritized by customer count where crews were needed most and worked with supervisors and area operation leads to dispatch them to those locations, all while working from home. Tim Laeupple, line operations manager, recognized her effort and thanked her during a conference call.

Crews in the field encountered many stretches of downed wire and at least 14 broken poles. Conditions also were difficult, with snow and rain continuing into Sunday afternoon in some areas. A crew in the Western Division encountered standing water two feet deep along one stretch of downed wire, with everyone on the crew getting wet feet as the cold water topped their boots while working at night.

Minnesota Power crews from other areas were shifted to the hardest-hit areas. In addition, Xcel Energy contributed five contract crews that traveled from northern Wisconsin to Cloquet to help finish the job, and they had no close contact with other MP lineworkers.

"From planning in the days before the storm hit to the execution that occurred once it arrived, I can’t think of another storm response that had the volume of trouble orders we received get restored as quickly as this one did,” Laeupple said. “From home, the field, and from a few very quiet offices this storm response displayed the amazing talent of folks from across the organization who worked tirelessly thru every challenge thrown their way without injury or incident. I couldn’t have been more proud of how this entire team responded.”

Dan Gunderson, vice president – transmission and distribution, saw the storm response up close as he volunteered as a “damage assessor” to start to scout job sites for crews before calling in more skilled reinforcements.

“I am amazed at the awesome effort by everyone last night! Amazing examples of leadership in action on the communication and restoration by the whole team,” he said. “Many thanks to all who helped bring quick resolution to this incredible event. All while working safely with all of the precautions during the COVID-19 pandemic. Thanks to everyone who responded with such dedication and focus.”

Superior Water, Light and Power crews also worked hard, efficiently and safely to restore multiple outages of their own on Sunday, including one large one in the afternoon. While SWL&P was not hit as hard as MP, there were enough service lines down and individual power interruptions to keep a trouble crew moving for an entire 16-hour shift, including a pole change-out after the large feeder outage that affected 2,000 customers in the late afternoon.

Customers, with a few exceptions, largely appreciated the effort to restore power, and many expressed thanks via social media. Here are just a few of their kind words:

“Thank you from your grateful customers.”

“Thanks, our power just turned back on in Gnesen!”

“Just got power back. Thank you so much for your hard work!”

“Thank you for restoring power in Meadowlands.”

“Thank you MN POWER! You rock.”