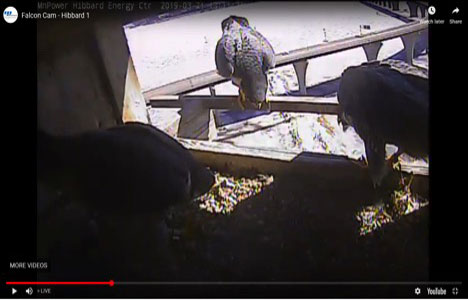 Three adult peregrine falcons—likely one female and two males—were at the Hibbard nest box on March 21. 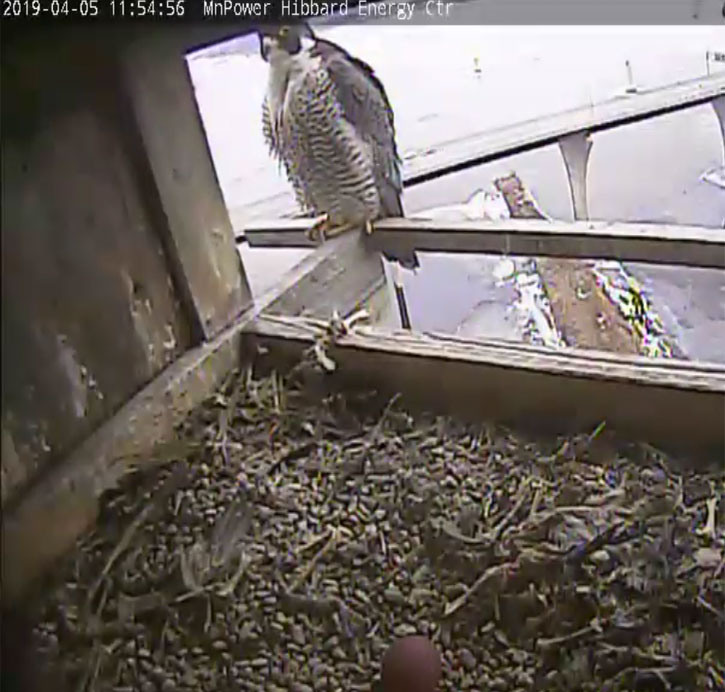 Peregrine eggs, like this one at center bottom of the image, are typically about 2 inches long. The falcons don’t do any nest building beyond some scraping to create a depression in the gravel. This image is from Hibbard on April 5. Two eggs were in the nest box by April 8. 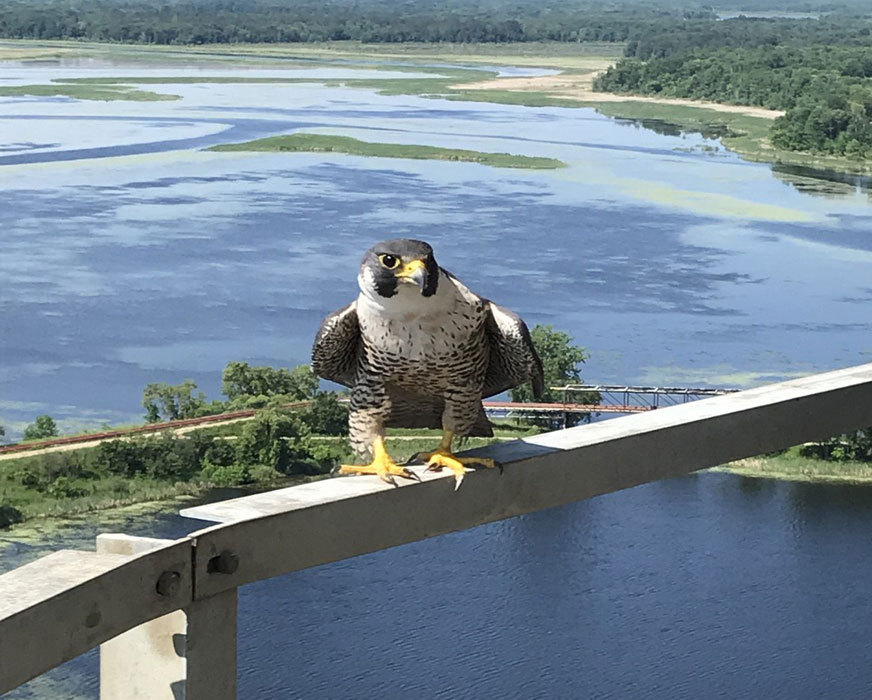 This female peregrine watched over the banding activities in 2018 at Boswell.

The egg sightings come about three weeks after a lone falcon was seen at Hibbard on March 14. Three of the raptors were seen March 21 at Hibbard and two were seen at Boswell the same day.

Doug Braff, programmer analyst senior who maintains the FalconCams at the two sites, could hardly believe his eyes when he saw the three adult birds—“with much activity”—in the nest box at Hibbard the day after the spring equinox. He wondered if he was watching one female and two male contenders.

Amy Ries of the Raptor Resource Project confirmed his suspicions.

“That is exactly what was going on!” she said in an email. “Glad one didn’t get killed in the box!”

Minnesota Power is a longtime partner with the Raptor Resource Project in Decorah, Iowa, which specializes in the preservation of birds of prey, such as falcons and eagles. Specialists from the nonprofit visit Boswell and Hibbard almost every year to band any newly hatched birds.

The migrating raptors typically return to Duluth and Cohasset in March. Males usually return first, followed by the females. According to the Cornell Lab of Ornithology, peregrine falcons typically lay two to five eggs, and the incubation period is about 32 days.

This spring, Braff had an even better look at the goings-on of the returning birds thanks to installation of new software that allows the cameras to stream live video from the nest boxes straight to YouTube.

One of the two Boswell cameras appears to have a smudge, but any cleaning will have to wait for several months until after any chicks that hatch are ready for banding. Ries said it’s very hard to drive falcons away when they have eggs and young, but easy to drive them away if they’re disturbed before then.

Braff also hopes to get a second working camera at Hibbard and perhaps microphones at both boxes so viewers can eavesdrop on the birds as well. Braff, a former volunteer at Hawk Ridge in Duluth, has helped plan and participate in many of the bandings at Hibbard and Boswell. “It’s been a real pleasure to do this kind of stuff,” he said.

This “stuff” also includes climbing the stacks where the nest boxes are located to perform maintenance on the boxes and cameras when the birds aren’t around. He jokes that he may be the oldest employee to have ever climbed them.

You can keep an eye on the falcon activity by clicking on FalconCams on mnpower.com and watch as they lay eggs and raise their young.