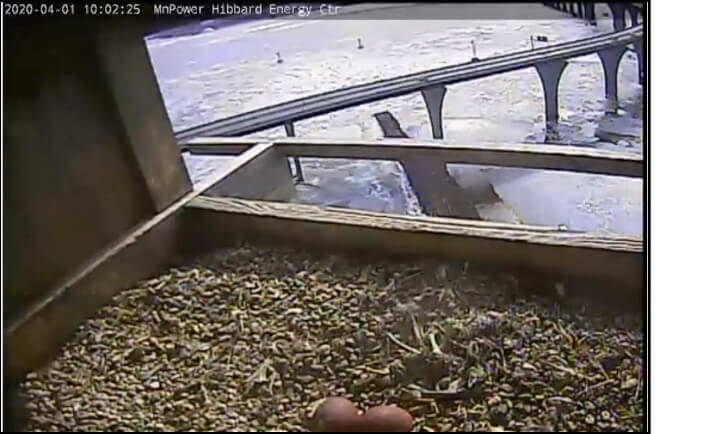 Two eggs in the nest box at Hibbard Renewable Energy Center in Duluth. 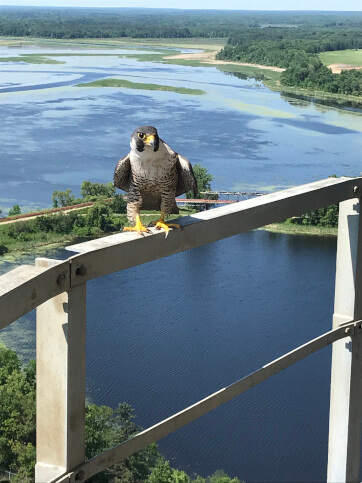 The female adult peregrine at Boswell in June 2018. It’s unusual for the parents to stay so close while banders are handling the chicks.

Two peregrine falcon eggs were in the nest box on April 1, a tangible reminder that nature carries on even as the rest of the world is upended by COVID-19. We’re still waiting to see what happens at the Boswell nest box.

Falcon fans can tune in to watch live episodes of “Egg Watch 2020” at FalconCam on Minnesota Power’s website or on “Nestflix,” a network of peregrine falcon, eagle and kestrel cameras managed by the Raptor Resource Project in Decorah, Iowa. The nonprofit develops and maintains nest sites and provides training in nest site creation and management to preserve and strengthen raptor populations.

Minnesota Power is a longtime partner with the RRP, and specialists from the nonprofit organization visit Hibbard and Boswell almost every year to place leg bands on any chicks that hatched in the nest boxes attached to stacks at the two power plants.

RPP’s Nestflix includes links to nest videos at more than 15 sites—including Minnesota Power. In addition, RPP also offers a free online classroom and lesson plans, valuable resources for teachers and parents as schools have closed and learning has moved to the home.

Amy Ries, an RPP naturalist, said the online classroom currently serves more than 1,500 teachers with about 45,000 students and the video streams have been watched by almost 400 million people around the world. Since 1988, RPP has worked to preserve and strengthen raptor populations, expand participation in raptor conservation and educate people around the world about raptors and their habitats.

“We have been a voice for birds and that makes me proud,” Ries said. “But I’m especially proud of our utility/peregrine program, which did so much to recover the peregrine falcon here in the Midwest. Thank you to Minnesota Power for being an early partner in that.”

About those lesson plans

Ries said the lesson plans on the RRP website were developed by four teachers who serve on the nonprofit’s education committee. The free plans are centered on RRP’s bald eagle and peregrine falcon web cams and can be used as is or tailored to fit a variety of ages.

Given the number of schools that have closed, the Raptor Resource Project also invites teachers and parents to join its educational chat. The chat is moderated and open from 8-11 a.m. and 1-3 p.m. CST. Visitors will need to log in via Facebook, Twitter or Chatroll.

The migrating adult raptors typically return to Duluth and Cohasset in March. Males usually return first, followed by the females. According to the Cornell Lab of Ornithology, peregrine falcons typically lay two to five eggs, and the incubation period is about 32 days. The falcons don’t do any nest building beyond some scraping to create a depression in the gravel in the nest box or on high ledges in the wild.

In the 1960s, use of the pesticide DDT nearly wiped out the entire peregrine population, and the raptor was named an endangered species in the 1970s. Power companies like Minnesota Power played a role in the peregrine’s recovery by placing nest boxes on the stacks of their power plants. The peregrine was removed from the Endangered Species List in 1999.

The RPP continues to work with Minnesota Power and other power companies across the Midwest to provide falcon nest boxes and do the leg banding that helps to maintain a healthy population. The leg bands allow researchers to track the falcons and their behavior, and do not harm the birds. Falcons raised in Minnesota Power nest boxes have been reported in Florida, Central America and on oil rigs in the Gulf of Mexico.