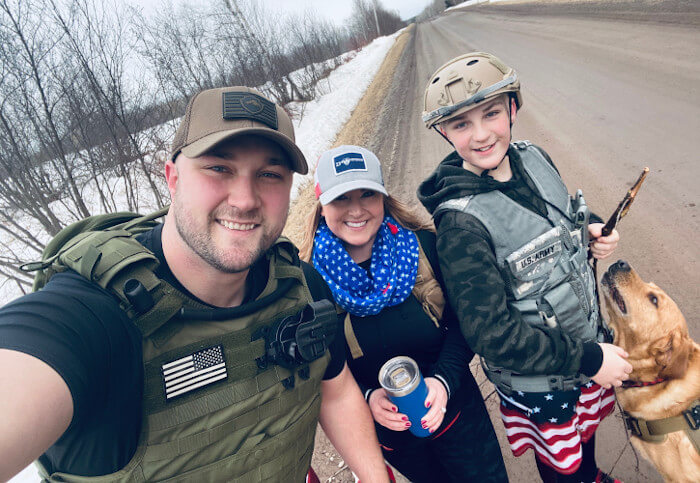 Matt Caple, along with his wife, Leah, and son Braeden and dog Finnegan, march in rural Esko. 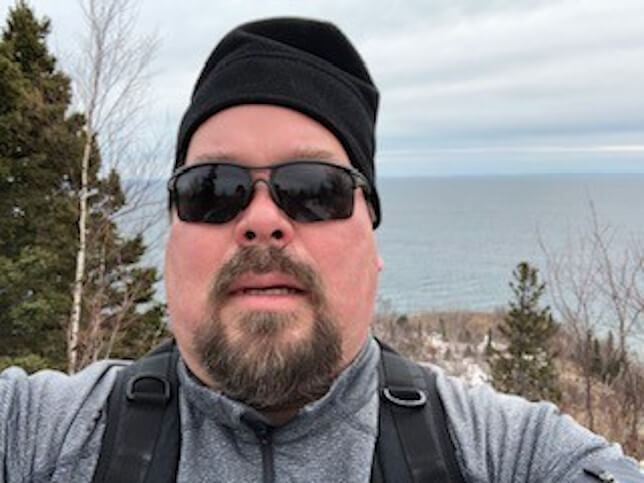 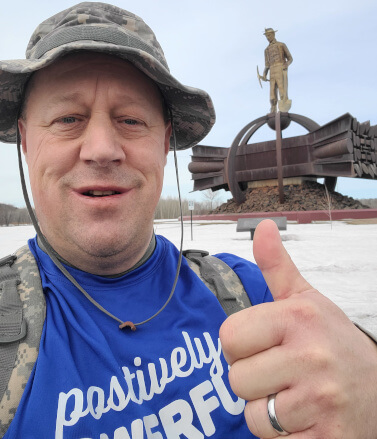 Paul Pinkoski gives the “thumbs-up” at the entrance to the Minnesota Discovery Center outside Chisholm. 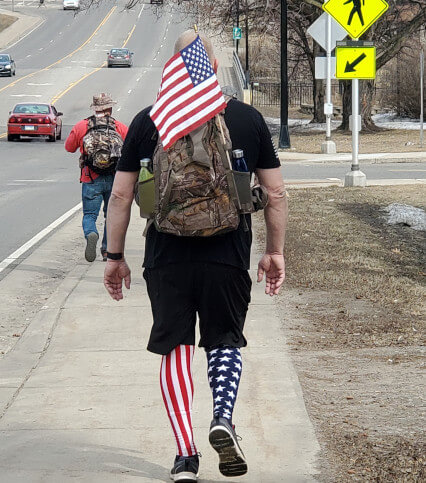 Todd Simmons carries a flag in his backpack as he rucks in Grand Rapids on Saturday. 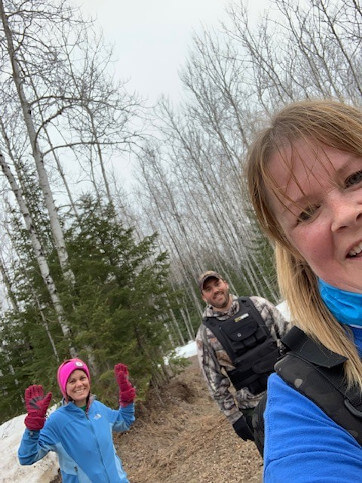 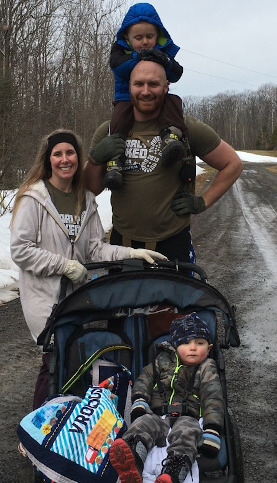 Bryan and Jacie Maslowski and their sons Kade and Finn. Bryan occasionally carried Kade on his shoulders in addition to his 75-pound pack.

The ruck marchers were miles apart but together in spirit as they stepped off for the 5th annual Nearly Naked Ruck March—this time as a virtual event.

Organizers took the fund-raiser for 23rd Veteran online this year against the backdrop of COVID-19. Instead of gathering at Enger Tower in Duluth as planned, participants rucked individually across the region on Saturday, March 28. And Team ALLETE and its estimated 40 participants came through again in a big way. For the third consecutive year, the team topped the leaderboard, this year raising $12,877. That’s more than a quarter of the total $42,777 raised.

Team ALLETE participants marched in a variety of locations: Todd Simmons was in Grand Rapids, Paul Pinkoski was in Chisholm, Chris Mattila was at Split Rock on the North Shore, Katherine Rasley was at Enger Tower and Satrina Powers was in Poplar along with Bryan and Jacie Maslowski. Many of the employees on the team were joined by family members and family dogs. Neighbors even came out to cheer on some of the marchers—all while maintaining a safe distance.

“Probably the best part of it was having neighbors come out of their houses as we rucked through rural Esko, clapping and cheering us on,” said Matt Caple. “With everything going on, I think this was a necessary mental break for everyone that could be a part of it.”

Bryan Maslowski said that while the event obviously had a different feel this year, it still was a great way to get outdoors with the family while participating in a larger event and raising money to help local veterans.

The virtual option also made it easier for those who don’t live in the Duluth area to participate. Pinkoski said he was excited to be a part of Team ALLETE and happy not to have to drive more than an hour home after marching for 10 miles.

The ruck march is the primary fundraising tool for 23rd Veteran, a veterans support organization based in Esko, Minnesota, that helps veterans transition from the military back to civilian life through a positive reconditioning program called 23V Recon. It costs about $6,000 to send one veteran through the program.

In addition to raising more than $12,000 by marching, the ALLETE team also earned a $500 Positively Powerful grant from the Minnesota Power Foundation for 23rd Veteran. Among the top individual fundraisers at the march were Todd Simmons and his wife, Susan, and Bryan Maslowski.

Weighted marching or “rucking” is a staple of military training. For the Nearly Naked Ruck March, you wear a backpack with weight and hike for 10 miles.