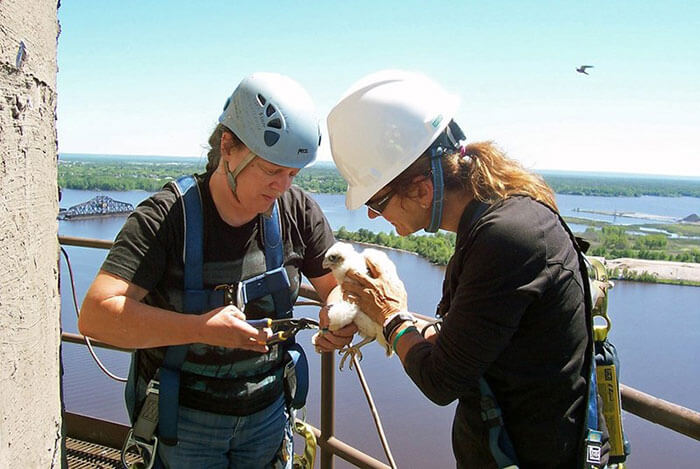 Amy Ries of the Raptor Resource Project (left) bands a peregrine falcon chick while Minnesota Power employee Molly Bradford holds the chick. Leg bands were placed on four chicks hatched at Hibbard Renewable Energy Center in June 2016, part of an annual effort to keep track of the falcons and their movements and behavior. An adult falcon keeps an eye on the proceedings in the background. 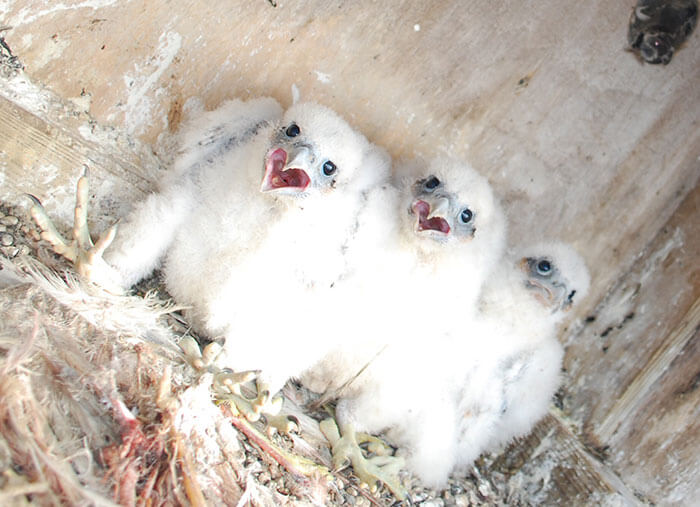 Three chicks at the Hibbard Renewable Energy Center in 2012. 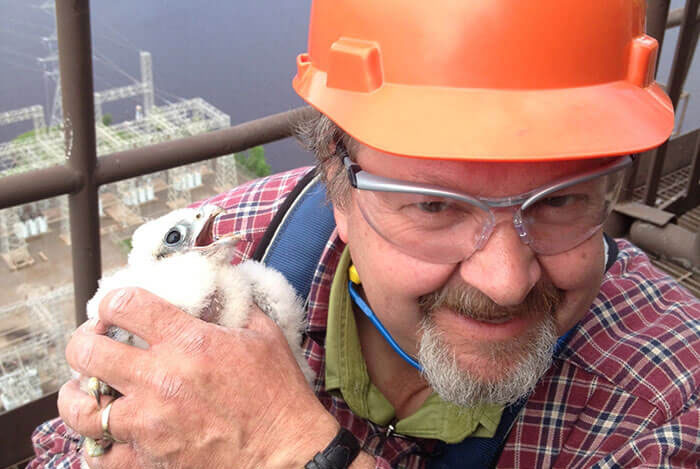 Doug Braff, a Minnesota Power employee, holds one of the young falcons during banding at Hibbard Renewable Energy Center in 2013.

The migrating raptors usually return to the facilities in March. They seek high, out-of-the-way places, such as the stacks at power plants, for nesting and pursuing their prey. Males usually return first, followed from one to three weeks later by the females. Bird-lovers from around the world can check in on the peregrines via Minnesota Power's FalconCam, cameras that show continuously updated live images of the nesting boxes at both power plants, as well as 24-hour views of the occupants.

In a typical year, the birds lay their eggs in mid-April and the chicks hatch in late May. In 2016, four chicks hatched at the Boswell nest (2 females and 2 males) and four hatched at the Hibbard nest (2 females and 2 males). In an informal naming poll, Minnesota Power employees named the 2016 Boswell nestlings Screech, Lucky, Sunny and Daisy and the Hibbard nestlings Cole, Timber, Hydro and Gale.

The nesting boxes at Boswell and Hibbard are managed in partnership with the Raptor Resource Project in Decorah, Iowa. RRP banders travel to Boswell and Hibbard nearly every year to band the chicks and check their health. The information is included in a database for tracking the birds.

Peregrine falcons, nature's fastest birds, were threatened with extinction by the use of the pesticide DDT. The electric utility industry played an important role in the bird's recovery in the Upper Midwest.

Keep an eye on the falcon activity at Boswell and Hibbard at www.mnpower.com/FalconCam.