Time to tune in to MP’s FalconCam 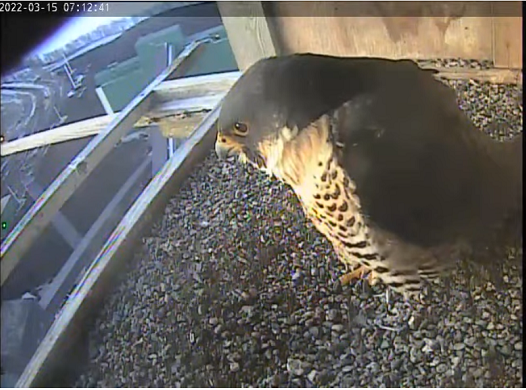 A peregrine falcon rests in the nest box at Boswell on March 15. 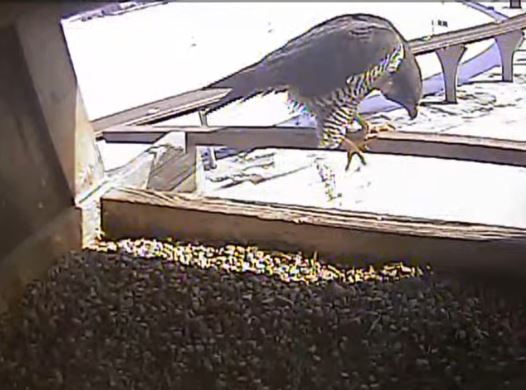 A falcon at Hibbard in early March.

Spring is in the air with recent sightings of peregrine falcons at the Hibbard and Boswell nest boxes.

Can courtship be far behind?

The Raptor Resource Project in Decorah, Iowa, a longtime peregrine partner with Minnesota Power, says the Hibbard falcons generally lay eggs between late March and mid-April, hatch begins early to mid-May, fledge occurs 38-40 days after that, and the young disperse in late August or mid-September. Boswell is usually about two weeks or so later. You can watch as the falcons raise their young via Minnesota Power’s FalconCam.

A team from the RRP visits Hibbard and Boswell almost every year before the chicks fledge to complete a heath check and fit the young birds with leg bands. The bands are an important tool in monitoring the peregrine falcon population in North America.

According to the Raptor Resource Project’s 2021 banding report, teams banded 80 falcons at 29 sites last year, a record for the organization, which is especially invested in monitoring the health and productivity of the Midwest peregrine falcon population.

“Decades of monitoring show that peregrine falcon migration and nesting patterns are shifting along with the climate. Nesting in the Upper Midwest begins earlier than it did several decades ago, and we see impacts on productivity from insect pests that are connected to flooding and warmer weather patterns,” John Howe, RPP director, writes in his introduction to the report.

The full report listing activity at falcon nesting sites in Minnesota, Wisconsin, Iowa and Illinois is available here. Find more information about the Raptor Resource Project, including links to nest cams, here. And don’t forget to check in at FalconCam as these amazing raptors raise their families.