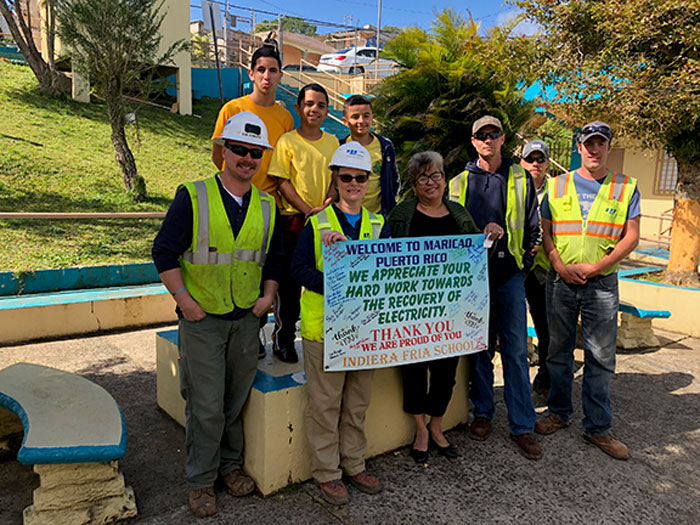 Teachers and school Principal Annie Baez signed this banner for the team to take home. From left are Tim Horgan, Carolyn Meysembourg, Baez, Bob Larson, Dusty Pickar and Aaron Nelson. Several students from the school are behind them. 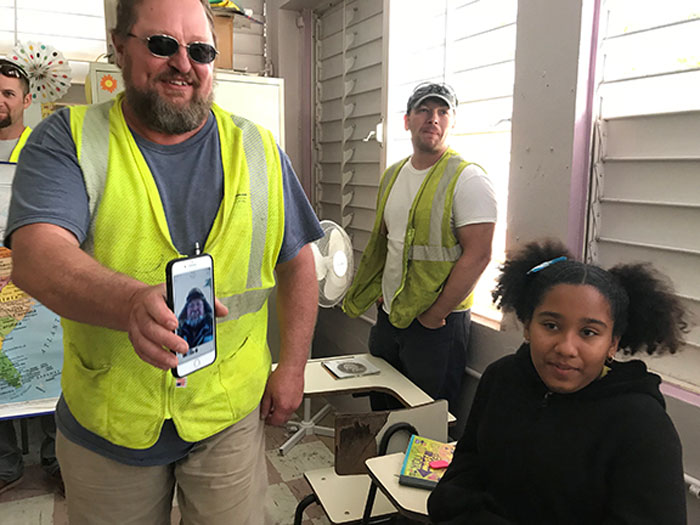 Dale Torma shows students a photo of himself sporting an icy beard. 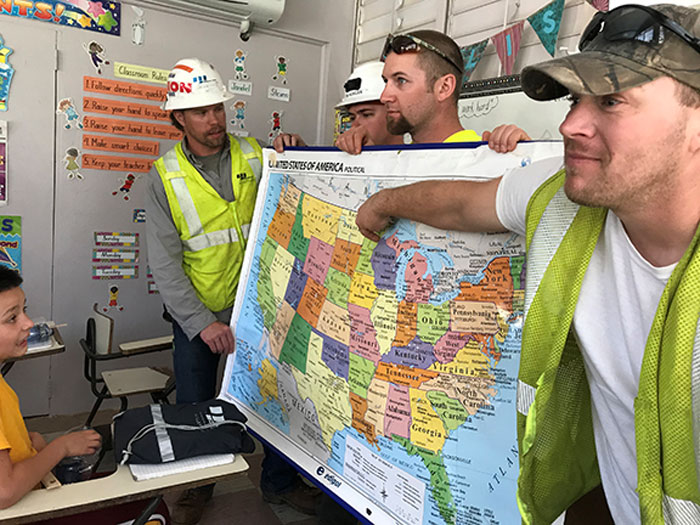 A teacher pulled out a map of the United States so the lineworkers could show students where Minnesota is located. From left are Dusty Pickar, Tim Horgan, Mark Horbacz and Pete Haman. 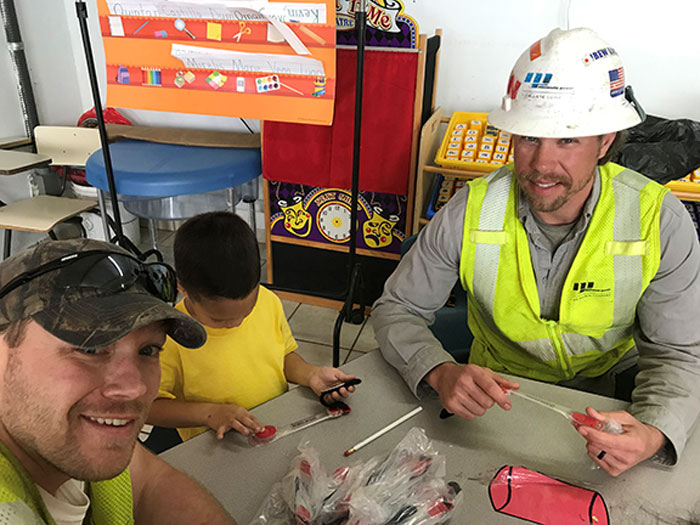 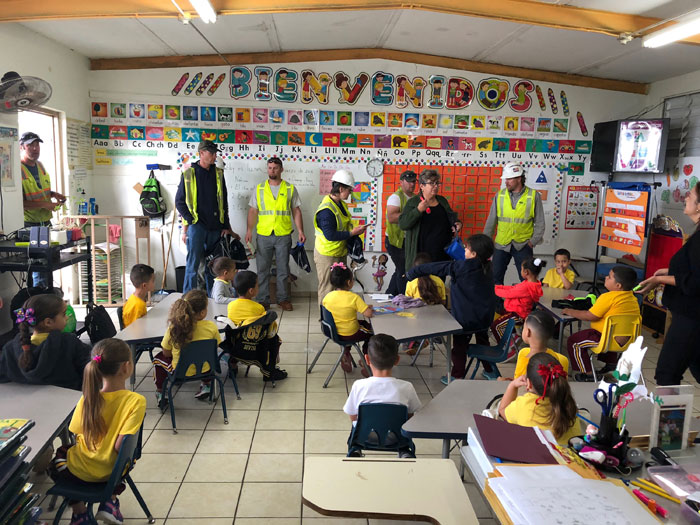 The response team visits a kindergarten class at Indiera Fría elementary school. The team distributed a selection of small gifts to students and teachers there.

Students at Indiera Fría elementary school in Maricao, Puerto Rico, loved the photo Dale Torma pulled up on his smartphone to show them. The photo was of Torma with his beard crusty with ice on a frigid Minnesota day.

“You look like Santa Claus!” the kids said as everyone laughed.

Torma was at the school in early March with others from the Minnesota Power/Superior Water, Light and Power response team to hand out a selection of goodies, including backpacks from family safety days, safety glasses, coloring books, water bottles and light-up safety bracelets/armbands.

“Their eyes lit up,” said Carolyn Meysembourg, safety specialist II, who helped distribute the items to the children. “They were curious—‘what are these things’—they loved the safety glasses and put them on. … They are the sweetest kids.”

In one classroom, lineworkers held an impromptu geography lesson. Holding up a map of the United States, they pointed to Minnesota, a place probably unfamiliar to many of these children before the first MP/SWLP team arrived in their town in January. Unlike the balmy weather on the island, it’s very cold, “hace mucho frío,” in Minnesota, the lineworkers told them.

Annie Baez, principal at the school, said the students were excited to have the team visit and thankful for the gifts.

“The experience of being surprised by the employees of Minnesota Power is gratifying. I really appreciate the visit and am grateful for all that Minnesota Power has done in our community,” she said via text message.

Meysembourg and Dean Erdman, operations supervisor, said they wanted to distribute the gifts as one way to say “thank you” for the hospitality the community has shown the team, including the frequent invitations to lunch.

“Everybody is just unbelievably nice to us,” Erdman said. “People come out of their homes and wave to us every day as we drive past.”

The second team from MP/SWLP arrived on Puerto Rico on Feb. 25, replacing the first team that spent most of its five weeks on the island stringing wire and setting poles before they could restore power to customers, including Indiera Fría, one day before they left the island. The school continued to hold classes while the power was out, but returned to a regular schedule once power was back on.

The mountains, steep ravines and dense vegetation of the remote Mayaguez region make power restoration challenging, but crews have made good progress and Erdman said more than 95 percent of the area is restored. Working with crews from Southern Co., who also were assigned to the area, “we’ve done a whole heckuva lot of work in seven weeks,” Erdman said.

Erdman and Aaron Nelson, engineer II, also complimented the crews on their attention to safety.

“Everybody’s watching out for each other,” Erdman said.

The second team is expected to return to the mainland March 19. In addition to their memories, they’ll be coming home with a heartfelt “thank-you” banner signed by the school’s principal and teachers.