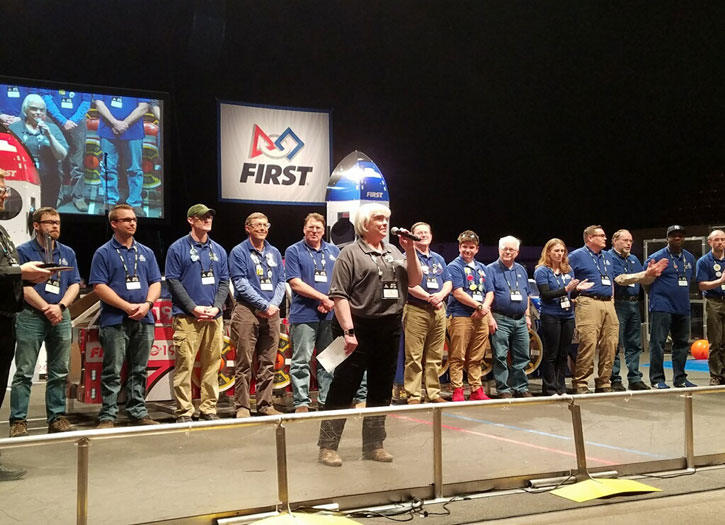 Lori Frisk prepares to give the Judge’s Award during the awards ceremony. 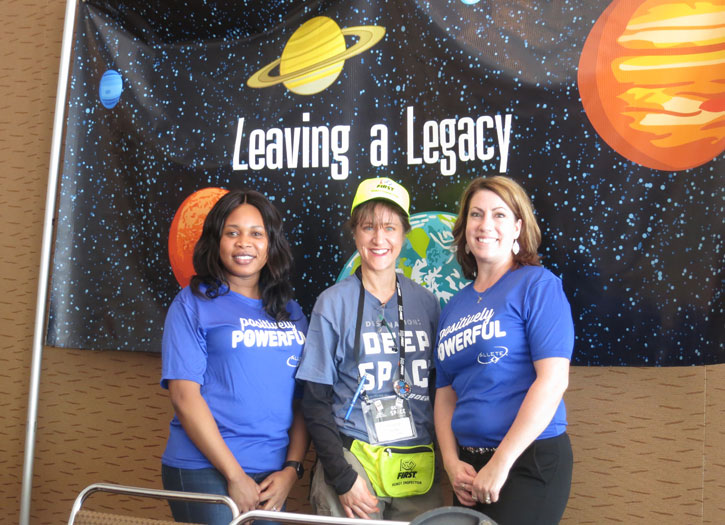 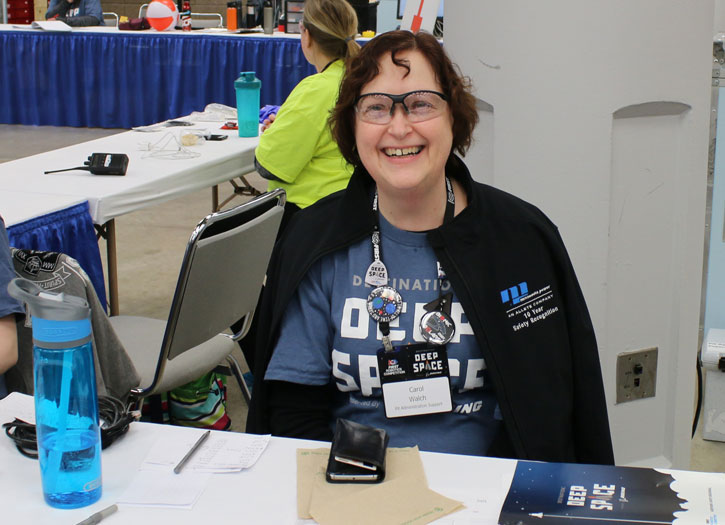 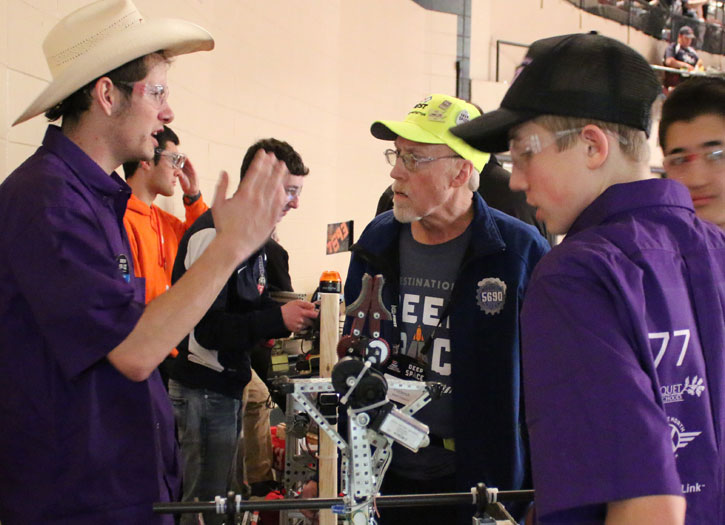 Jerry Frederick listens to a student explain a facet of his team’s robot. Frederick served as a robot inspector and also is a team mentor. 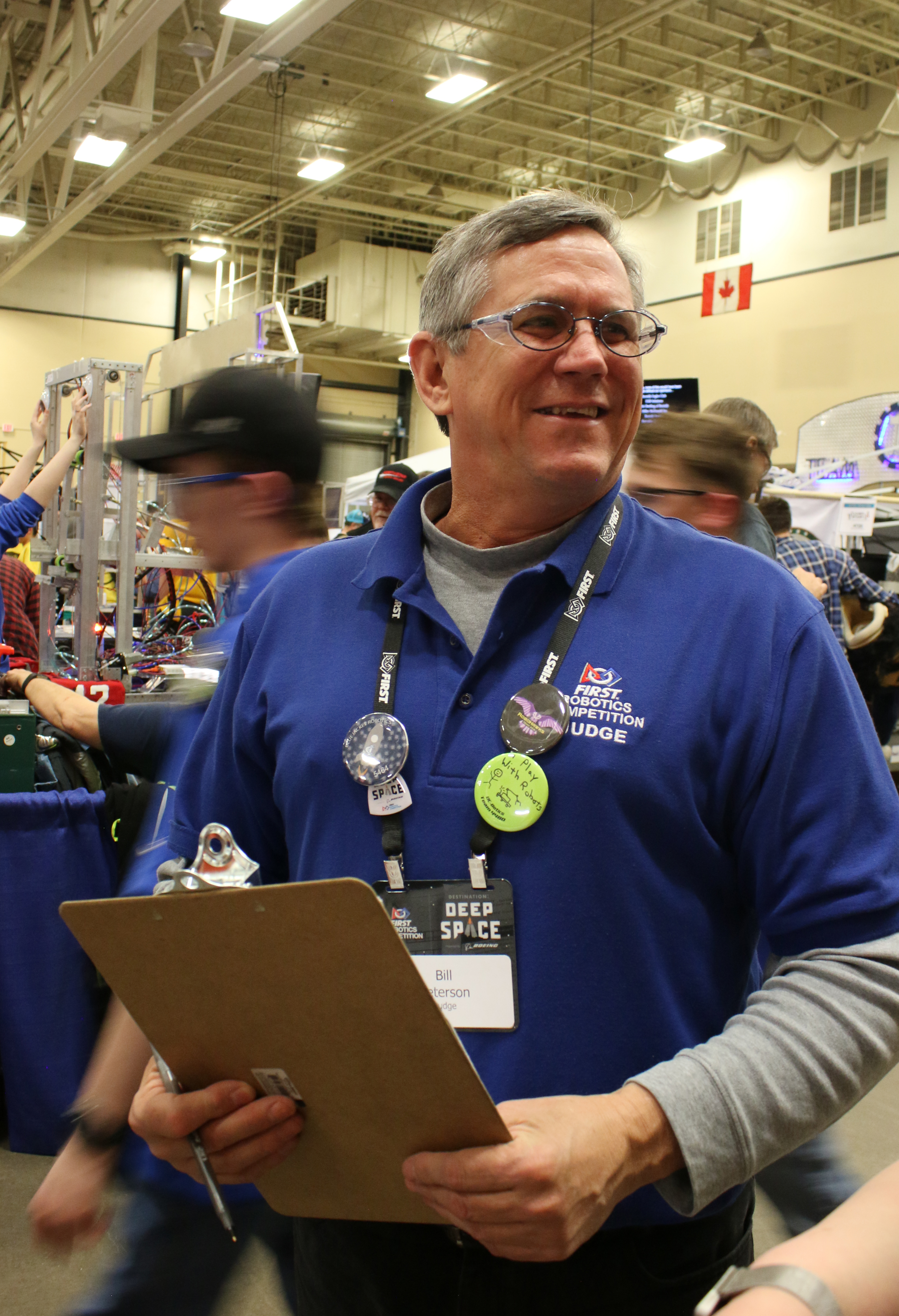 Bill Peterson, a judge for the Lake Superior regional.

More than 20 ALLETE and Minnesota Power volunteers hit the DECC March 7-9 to help out at the FIRST Robotics regional competitions and participate in a gathering to encourage girls to pursue STEM-related education and careers.

The FIRST Ladies event on March 7 helped kick off three days of competition as more than 120 teams from across the upper Midwest brought their robots to the Duluth Entertainment Convention Center to participate in the Lake Superior and Northern Lights regionals.

Katherine Rasley, engineer 1, helped to organize the FIRST Ladies gathering and served as emcee. Sponsored by Northern Clearing, the event was designed to encourage girls participating in the robotics competitions to consider pursing careers in science, technology, engineering or math—STEM fields which have been dominated by men in the past.

Young women filled the DECC’s Harborside Ballroom to hear from a panel that included Eva Chicheko, programmer analyst, and Kelly Blindauer, supervisor operations budget and analytics. The panelists answered a range of questions: Who are your role models? What has been your greatest obstacle? How do you deal with “man-splaining?” What keeps you going?

Chicheko said one of the biggest obstacles for her was the fear of not knowing the answer or having a solution and she encouraged the girls to “feel free to ask questions whenever you need help.”

Blindauer suggested breaking down big goals into smaller objectives and “acknowledging your growth along the way.”

Girls representing a robotics team from La Crescent, Minnesota, were among those in the audience and were unanimous in their assessment of the panel discussion: inspiring and empowering.

Lori Frisk, director system operations, performance and compliance, served as volunteer coordinator for the Lake Superior competition, working with about 150 volunteers to ensure a smooth event. Between setting up the field and pit areas on Wednesday and breaking them down on Saturday, Frisk’s job was to enable the volunteers to do their jobs. That meant lots of walking to check in on volunteers and to troubleshoot and solve problems.

Frisk said the company is proud to support individual teams as well as be an event sponsor.

“The skills and attributes students are learning and displaying here are what we need in our future workforce,” she said.

Frisk also gave out the Judge’s Award during the Saturday afternoon awards ceremony. That award went to the Hilltoppers from Milwaukee, Wisconsin, but several other awards went to teams sponsored by the Minnesota Power Foundation. Esko’s SubZero Robotics qualified for the world competition by winning the Lake Superior regional; Duluth East Daredevils won the Gracious Professionalism Award and Cloquet’s RipSaw Robotics won the Rookie All Star Award.