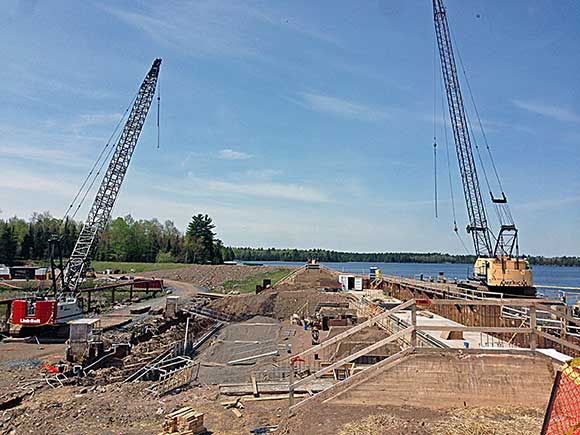 The concrete labyrinth weir spillway at the North Dike on Island Lake was constructed in 2016. 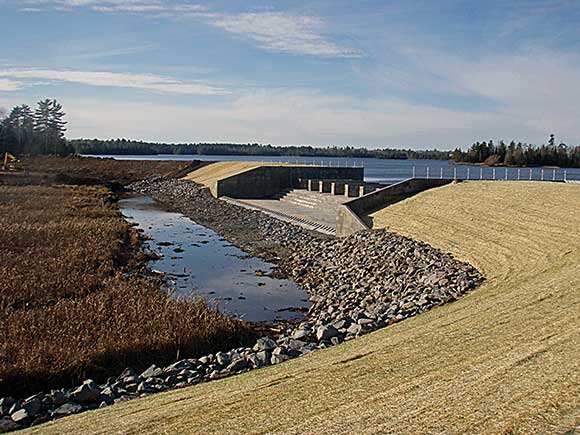 The concrete spillway and concrete stilling basin at the North Dike on Island Lake were designed using modern engineering standards that prevent erosion in the event of a high-water event.

Minnesota Power continually invests in improvements to its hydro system, the state’s largest, to improve safety for the public.

A recent example of such a project at a Minnesota Power hydro facility was finished in late 2016. The emergency auxiliary spillway at the North Dike at Island Lake Reservoir, built in 1915 and modified many times to accommodate operational changes of the reservoir over its 100-year life, required improvements to comply with modern design standards.

Those standards include what engineers call energy dissipation, or the ability of a spillway to safely reduce the energy of water flowing down its face and direct it away from the structure’s base to prevent erosion.

The North Dike spillway was raised 5 feet in the 1920s to provide for additional water storage in the reservoir. The "design flood" at the spillway also has changed over the years because of the amount of available storm data and more sophisticated computer modeling used to predict the potential maximum flood for the Island Lake Dam. Based on these two factors, Minnesota Power elected to reconstruct the spillway using modern design standards to ensure the spillway performs safely and reliably during high-flow events.

"The concern was that more water dropping from a higher elevation equals more energy at the foot of the dam," said Minnesota Power Dam Safety Engineer David Aspie, who works on dam and spillway design with a number of engineers in the Minnesota Power Engineering Services department, as well as outside consultants and the Federal Energy Regulatory Commission (FERC). "The necessary energy dissipation wasn’t there."

To correct the issue, Minnesota Power settled on a new concrete labyrinth spillway with a concrete stilling basin located within the footprint of the existing North Dike embankment. The new spillway is a passive system that will activate on its own during a flood.

"We can easily pass the design flood through the spillway, so Island Lake Reservoir will pass a high-flow event without needing people to open gates," Aspie said. "The current design won’t be undermined by erosion. We’ve designed that possibility out of this dam."

Island Lake Reservoir covers about 10,800 acres with a maximum depth of about 94 feet and is made up of three components. The main dam is an 850-foot-long earth fill dam with a 60-foot-wide concrete discharge structure. The South Dike, about 1,800 feet long and 12 feet high, is located three-quarters of a mile south of the main dam. The North Dike is an earth fill dike about 1,100 feet long and 21 feet high. It is 1.2 miles north of the main dam on the westernmost lobe of the reservoir.

Many of Minnesota Power’s dams, spillways and other hydro structures date to the early 1900s, but Aspie said they were designed well and are constantly maintained, inspected and upgraded as necessary.

Much of Minnesota Power’s hydro system faced a high-water test during the great flood of June 2012, when up to 10 inches of rain fell along the St. Louis River in 24 hours. Most of Minnesota Power’s hydro facilities along the river proved their ability to withstand the power of such a flood. The only structure that didn’t survive that flood was the forebay earthen embankment above the Thomson generating station, which was breached in one location.

An emergency spillway designed for the forebay, which holds water before it is sent downhill to the generating station, was completed at Thomson in 2015. It is designed to handle rainfall about twice what fell during the 2012 flood.

Aspie said the Island Lake North Dike and Thomson spillways both act like the overflow drain in a bathtub by draining the reservoirs or forebays behind them before water overtops dams and other dikes. These investments in the hydro system since the flood, regular maintenance and inspections, as well as good initial design and construction, have strengthened Minnesota Power’s hydro fleet in northern Minnesota.

Christopher Rousseau, manager of hydro operations at Minnesota Power and a professional engineer, said he is proud of the efforts and dedication of the hydro engineering team.

"Our hydro engineering team is an exceptional group of very talented professionals committed to protecting the public’s health, safety and welfare while producing reliable, affordable and renewable energy for northern Minnesota," he said.

In addition to the dams, dikes and generating stations along the St. Louis River system, Minnesota Power operates hydro facilities along the Mississippi, Crow Wing, Kawishiwi and Prairie rivers. Together they produce 120 megawatts of electricity.

Al Hodnik, chairman, president and CEO of Minnesota Power’s parent company, ALLETE, said he is proud of how the hydro team recovered from the 2012 flood and improved many systems and designs. The company also recently added protection of the public to its safety creed.

"Most often that is thought about in terms of storms and power outages versus hydro dike, dam or spillway breeches," he said. "The recent California hydro experience is a reminder to us all about how much the public, and more importantly our host cities and families, are counting on us for their safety."