Reward of ‘lights on’ comes 1 day before crews head home 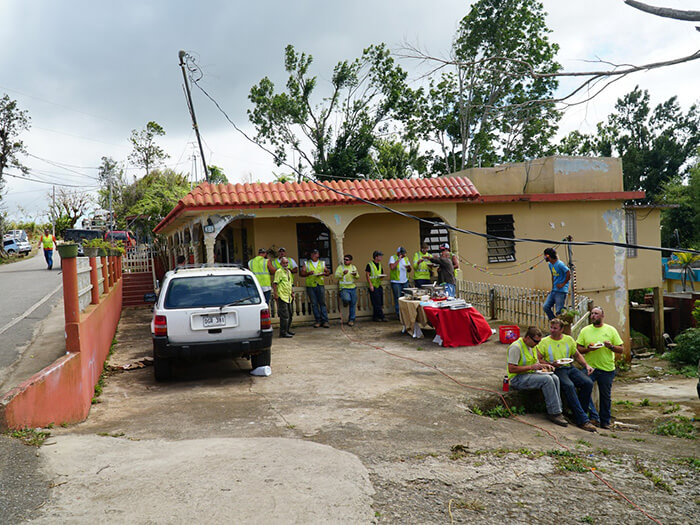 The Vargas family invited crews to lunch last week to show their gratitude for the work they’re doing. Until Friday when their power was restored, they used a gas-powered generator to keep their grocery store operating.

Crews arriving home from Puerto Rico and crews preparing to depart for the island were able to talk for a few minutes Saturday in the airport at Minneapolis.

The payoff for five weeks of hard work stringing wire and setting poles came with just four hours remaining in their last day of work in Puerto Rico. It was time for the lineworkers from Minnesota Power and Superior Water, Light and Power to turn the lights back on for customers.

“It was amazing,” supervisor Dean Erdman said by telephone Monday morning as he described what happened Friday afternoon on the island. “Unbelievable.”

After more than a month in Puerto Rico, the lineworkers weren’t sure they would be there when power was restored where they’d been working in Maricao, a remote, mountainous area hit hard by Hurricane Maria. PREPA, the Puerto Rico Electric Power Authority, had to energize a substation before individual customers could get electricity. PREPA energized the substation at about 3 p.m. Friday, Feb. 23, and the response team immediately went to work, hustling between transformers and checking voltage to get as many customers restored as quickly and safely as possible before they left the island Saturday and the next crews from Minnesota and Wisconsin arrived on Sunday.

About 340 customers had power by the time crews ended their workday an hour later than usual Friday evening. Erdman said another 20 to 40 customers will have their power back today as the second group of lineworkers from MP/SWLP dives into work.

After nearly five months of living without electricity, there was no denying the joy of Maricao residents on Friday afternoon. Erdman shared videos of residents cheering and Lluminado Rivera Ruiz, known as “Baron” to the line crews, shouting “I like Minnesota Power” before hugging lead lineworker Mike Stingle. Another resident took to his car, spinning the tires and raising a cloud of smoke.

The response team was thrilled, too.

“It’s like seeing your kid opening a present at Christmastime,” Erdman said.

The crews got to know many of the residents in the area, if not by name by face, as they drove to and from their work sites. Several families prepared lunch for them, including the Louis and Maria Vargas family. Last week, the Vargases laid out a spread of pork chops, barbecued chicken, pasta salad, rice and corn bread on the patio behind their home.  Until Friday when their power was restored, they used a large gas-powered generator to keep their grocery store and hope operating. Power also was restored to two schools.

After “working their butts off,” the crews sat down to a steak dinner at a restaurant Friday night, Erdman said. All they could talk about were the customers and being able to finally restore power to them.

While the crews were happy throughout their stay to be making a difference in the lives of Puerto Rico residents, they had become resigned to not being there to see the lights go back on for them. The turn of events on Friday made all the difference in the world.

“It was a lot of fun,” Erdman said. “It was like a relief. Like a 100-pound weight got lifted off their shoulders.”